Zoonotic Diseases | Ticks are a carrier of diseases

by Abeer Arshad
in Articles, Health
0

Zoonotic diseases are quite prevalent these days. Zoonotic diseases are transmitted between animals and humans. Transmission may occur directly from vertebrate animals or through arthropod vectors. One important arthropod vector of pathogens is the tick. Ticks can transmit viruses, bacteria and other parasites to humans and animals. Tick-borne pathogens can be passed to humans by the bite of infected ticks. Some of the most common tick-borne diseases around the world include Lyme disease, babesiosis, anaplasmosis, Southern Tick-Associated Rash Illness, tick-borne relapsing fever, and tularemia.

In Pakistan, tick-borne diseases are prevalent in livestock. Livestock plays a pivotal role in Pakistan’s economy by uplifting the socioeconomic conditions of resource deficient farming communities and alleviating poverty. The livestock sector in Pakistan is represented mainly by small farm holders to meet the needs of nutrients and proteins, food security, and income. According to Pakistan Economic Survey, water buffaloes, and cattle with an estimated population size of 35–40 million, are the main milk-producing animals, and yielding approximately 18,000–31,000 million tons of milk. Animals suffering from tick-borne diseases show pyrexia, progressive anemia, jaundice, anorexia, depression, reduced milk production, abortion in pregnant animals, and death, particularly in exotic breeds.

Ticks and tick-borne diseases (TBDs) cause substantial economic losses effecting both the farmers as well as urban markets. Tick-borne diseases result in lower productivity of both beef and dairy cattle in the effected regions.  In 2012, Theileriosis, babesiosis and anaplasmosis have been reported to affect both buffaloes and cattle in Pakistan.

Ticks also transfer diseases from animals to humans. Ticks carry bacteria. This bacteria attacks the immune system of the body. It makes infected person very tired and also causes fever, chills, muscle aches, headaches, and stomach pain. Symptoms usually show up 1 to 3 weeks after a tick bite. Outdoor workers are vulnerable to tick-borne diseases if they work at sites or farms with ticks. Worksites with woods, bushes, high grass, or leaf litter are likely to have more ticks. Outdoor workers in most regions should be extra careful to protect themselves in the spring, summer, and fall when ticks are most active. Ticks may be active all year in some regions with warmer weather. 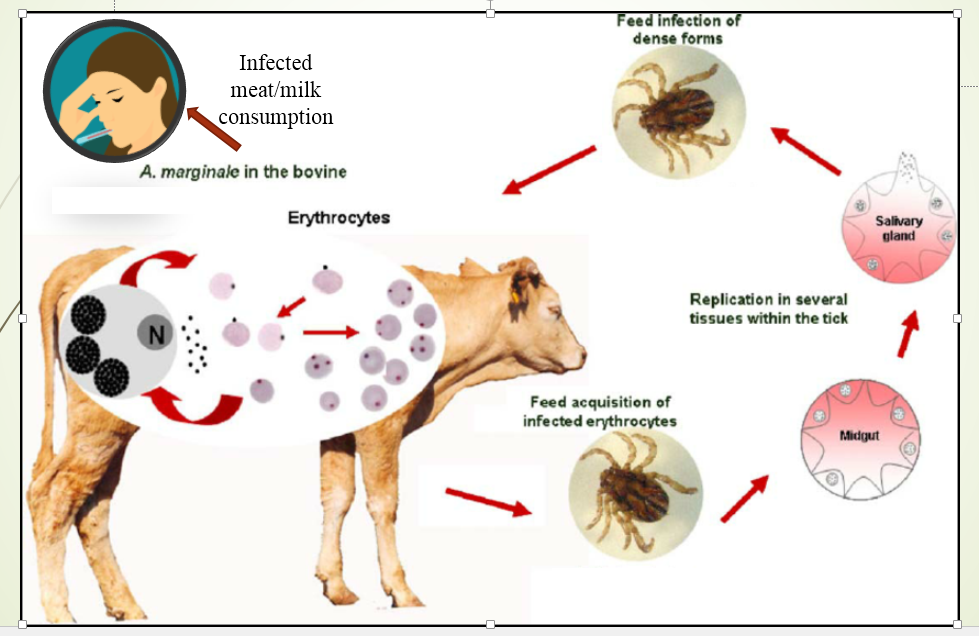 Currently, a number of methods, including chemical tick control, chemotherapy as well as vaccination are used worldwide to reduce economic losses resulting from tick-borne diseases in cattles. Although tick control has been the most commonly used method of controlling these diseases, the dependence against chemicals is decreasing due to the possible emergence of acaricides resistant ticks as well as public health concerns about residues in meat and milk. For tick control, grooming is the most commonly used strategy, particularly at small farms. In Pakistan, grooming involves the manual removal of ticks and burning them on the fire made with cattle dung cakes, which is also a common tick control strategy in other developing countries. Another method for the control ticks is spraying the animals and their surroundings with cypermethrine during high-risk months mainly May to September). Recently, with the establishment of large commercial dairy farms, a number of acaricides are also being used to control ticks on water buffaloes and cattle in Pakistan.

Tags: Ticks are a Carrier of DiseasesZoonotic Diseases
Previous Post

What it takes to have a strong immune system?

5 Ways to Staying Fit During Quarantine

Ways To Improve Your Life & Health

What it takes to have a strong immune system?