by Newsmaster
in Culture/Art
1

DISCRIMINATION on the basis of sex, gender, race and religion is illegal, so why do we continue to judge people on their appearance?

They are also intelligent, articulate, funny and successful, each with friends and families they love and who love them.

Drinking tea and preparing for work in her quirky, inner-city art deco unit, the stylish Holmes, 26, slips on earrings as she recounts a recent trip to New York where she saw nine stage shows in two weeks. A good exchange rate meant the musical theatre tragic could also indulge her other love: clothes.

Quietly spoken and personable, Holmes spent two years teaching English in Japan before returning to Brisbane where she works in administration at the University of Queensland and blogs about “fatshion” part-time.

Holmes got to know the heavily-tattooed Read, 39 – a self-described bolshy, punk librarian who has a black tutu (more like a “four-four”, she laughs) in her wardrobe and says pink is her natural hair colour – as participants in a Griffith University study on attitudes towards fat people.

Photos of them shopping, riding bicycles, doing yoga, putting on make-up, working and generally going about their daily lives have circulated nationally in a new image library created for mass publication.

Together with an exhibition by Queensland College of Art photographer Isaac Brown planned for October, stockybodies.com aims to replace the generic “headless fatties” images that negatively represent obese people. 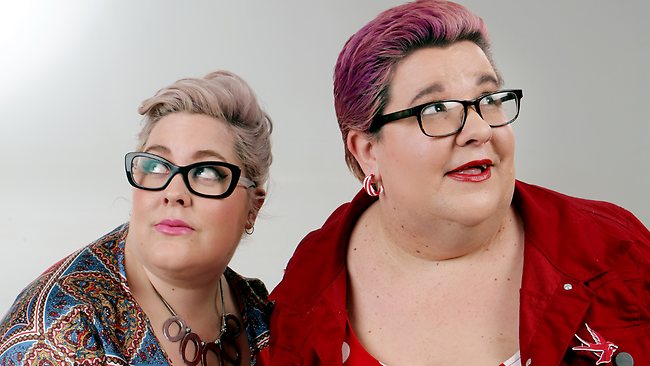 Read and Holmes are proud fat activists working to reclaim the word as a neutral descriptor (like tall, brunette, freckly or brown-eyed), and garner respect for people regardless of size and shape.

They eloquently argue appearance does not determine a person’s worth, good health is not necessarily determined by weight and physical characteristics should not dictate how people live their lives.

Fat activism and fat acceptance are not about promoting or justifying obesity, they scoff.

“I still find myself whispering (the word fat) when I’m in public because of how people react but … ” Read thumps the cafe table for emphasis, “I’m so proud of that word now. It’s mine, I’ve been called it my whole life.

“People say to me, ‘oh, you’re not fat’, and I’m like, ‘uh, yes, I am’,” the Brisbane bayside resident laughs. “But what they mean is, you’re not dirty, smelly, lazy, all those things associated with the word. You have to divorce those connotations.”

“For me the crux of (fat activism) is that every human being – fat, thin or in between – should be treated with dignity and respect,” Read says.

“The way I do that is by living my life as rich and as full as I possibly can; full-tilt, all the time, having a great time and letting people see me. Because you can’t be what you can’t see.

“There’s so much fat hate in the world. I’m not trying to win those people. I don’t give a damn about those people,” she says.

“Who I care about are the people who, like me, believed they were nothing, still believe they are nothing. They’re not. They’re something, they’re someone and they matter, even if they just matter to themselves.”

It’s one thing to type the word “fat” or read it on a page. It’s quite another to use it in conversation with someone – especially a stranger – who is, well, fat.

In fact, it’s downright uncomfortable. So ingrained is the perception its use is rude and insulting, I stumble and stutter while talking to Holmes and Read, using the word almost apologetically.

Dr Lauren Gurrieri laughs and admits it took her six months of working with Holmes, Read and several other activists to say “fat” with ease – especially as someone with “thin privilege”.

“The stereotype that comes to mind when you think of a fat person is they’re lazy, they’re undisciplined, they’re slovenly, they’re unmotivated; when you think about a thin body, it’s recognised as this health and social ideal and that’s reinforced constantly by the media, by the fashion industry, and health organisations,” says Gurrieri, a post-doctorate marketing research fellow collaborating with Brown on Stocky Bodies.

“There are so many powerful structures at play telling us if you’re thin, you’re successful and you’re a worthwhile contributor to society.

“On the other hand … it seems no matter how much or in what ways fat people present themselves or how they explain themselves, people just refuse to see past their fat flesh and they refuse to understand the complete person behind the body.”

Read cops a lot of abuse for being obese but is well-seasoned in shrugging it off. She’s been stared at, pushed, insulted, spat on, threatened and publicly humiliated more times than she can count.

“I’ll go up to people now and say, ‘what’s your problem?’ There were these guys nudging each other, looking at me, in a food court. I went up to them and all of a sudden they found their lunch very interesting,” Read laughs.

Shame and blame cure nothing and do little to encourage good physical, mental or emotional health, but obesity is the only health condition so overwhelmingly framed this way.

Obesity is the number one public health issue worldwide. A complex condition determined by oft-inherited genetics, environment and lifestyle, treating obesity is not just a matter of eating less and exercising more. 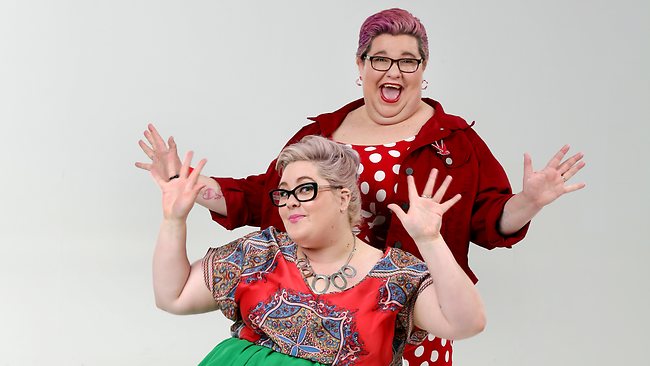 There is no magic cure and no diet that works universally, as Holmes and Read well know. Both have dieted from around 10 years old. They’ve tried every plan, pill and potion, consulted doctors, naturopaths and dieticians, all while exercising exhaustively.

Desperation led to borderline eating disorders and mental anguish. The numbers on the scales oscillated wildly but the weight always came back and more – which research shows is very common.

“Three-quarters of my life is spaced around that whole cycle of dieting and putting my life on hold, and only considering myself worthy of anything if I was thin – and I’ve not been thin since I was 11,” Read says.

“No matter how much weight I’ve lost, I’ve not got into a territory that took me out of what people would consider unacceptable, and that’s with some pretty massive weight loss. I was killing myself.”

Research shows diabetes, stroke, heart and kidney disease are strongly linked to obesity, but one doesn’t necessarily cause the other. Studies also show overweight and moderately obese people live as long as people in the normal weight category, if not longer.

Similarly, the medical fraternity has acknowledged limitations of the way optimal weight-height ratios are determined (eg the BMI or Body Mass Index).

Things such as fitness, activity levels, nutrient intake, weight fluctuations and environment are generally not taken into account by studies looking at links between disease and weight.

Read says her health is no one’s business but her own, and ultimately irrelevant to the debate. Holmes agrees but adds blood tests consistently indicate she is healthy, regardless of weight. Both are working to repair fraught relationships with food, to be able to enjoy eating again.

Read advocates American professor Linda Bacon’s Health At Every Size (HAES) philosophy, which argues wellbeing and healthy habits are more important than how many kilograms a person weighs.

Bacon argues we might be fatter than ever but we’re also healthier and living longer. She urges people to accept their size, listen to their body’s appetite cues, enjoy being active, nurture social, emotional and social needs, and recognise people aren’t made with a one-size-fits-all biscuit cutter. 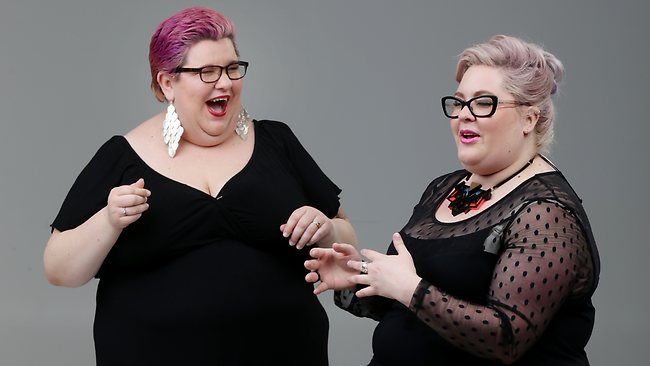 Reducing stigma and finding more effective ways to medically help people achieve good health is Professor Lesley Campbell’s “calling”. Campbell, director of diabetes services at Sydney’s St Vincent’s Hospital and a senior researcher at The Garvan Institute of Medical Research, agrees health cannot be judged by weight alone and says 30 per cent of obese people are actually very healthy – and science has a lot to learn about why.

“They’re survivors who carry these good genes because, for most of man’s existence, starvation was the more likely challenge. It’s only in the past few years that suddenly the environment changed and the people with the good survivor genes had this environmental interaction which makes them chubbier.

“When the next famine comes, the scrawny people will be wiped out,” Campbell laughs. “They will, they’ve got bad genes.” She says “harassment” methods limit the types of research done and potentially impede development of effective drugs and support services.

“People don’t blame you for having high blood pressure and yet they blame you for this disorder. Now, you tell me, who doesn’t want to look like a gorgeous model if they could, so why would they (be obese) willingly?

“As I keep saying, it’s a complex system and nature is so brilliantly controlling. Things worked out over man’s evolution are so much more complex than what’s put into a women’s magazine, that you’ve got to be this weight or that weight. It’s just not like that.”

Zoe Holmes and Kath Read are having the time of their lives. Since discovering the fat acceptance community and learning to embrace their bodies, their confidence, self-esteem and outlook have flourished.

Holmes has swapped her teen uniform of baggy jeans and men’s T-shirts for colourful, stylish clothes and accessories, make-up, pedicures and manicures. She’s celebrating her body, not hiding it.

Read has declared 2012 her Year of Living Fatly – “wilfully, offensively, obnoxiously fat. All over the damn place.”

She’s come up with a 12-step plan that includes laughing, having fun and eating in public, riding her bike, swimming and dressing fashionably. She’s bought her first-ever designer dress (three, actually), all from Leona Edmiston’s new plus-size range.

“It’s so hard for society at large to believe fat people have lives, loves, careers, hobbies, passions, style, intelligence, humour and value that I’m going to live my whole life doing all those things, having all those things, while being fat,” Read wrote in a recent blog post.

“Not to prove to society that we do have these things, but to be someone that other fat people can see and hear. To be a visible fat person breaking the mould. No more furtiveness about living life.”

Holmes and Read agree it’s taken a lot of personal healing to reach this point but there is plenty of support available, and they want other fat people to follow their lead.

“I take a lot of strength from the online and personal communities just to get through it all each day,” says Holmes. “It would be impossible without having like-minded friends to scream at, to commiserate with or celebrate with.

“I don’t know what the magic bullet is, or the magic answer, and I’m not saying I’m Miss Confident every day of the week because I’m not and nobody is.

“The best advice I’ve ever read is to be 110 per cent yourself. The rest of it will come later. You can’t be fake or faux or pull any punches about this kind of stuff, and that’s where my confidence comes from.

“I’m brutally honest about what I am and where I come from.”

Coping With Anxiety During Pandemic