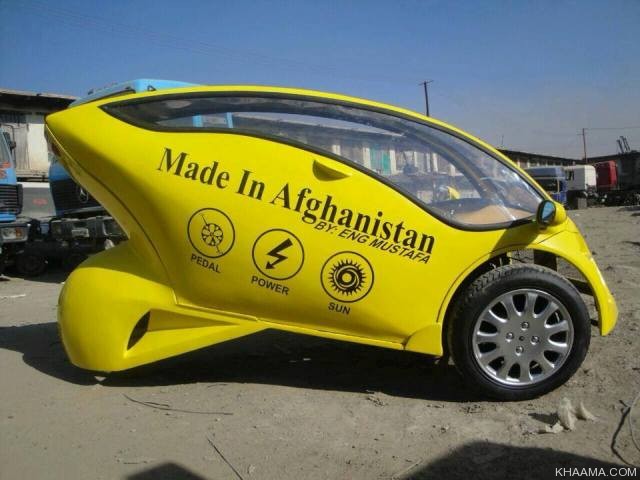 A young and talented Afghan man has built a solar-powered motorbike in yet another initiative by the young generation of the country who are keen to join the global technological revolution.

The solar-powered motorbike moves with the help of electricity energy obtained from the solar panels planted on the roof of the bike.

The design of the motorbike has also been made by the young man Mustafa. The bike can run at a speed of 40 kilometers per hour.

The designer has also planted pedals in the bike which could be used during the emergency conditions, specifically when the energy of bike has been totally consumed.

This comes as a young graduate of polytechnic institute in northern Jawzjan province of Afghanistan is busy to build homemade helicopter.

Ghulam Sediq has been graduated from the polytechnic institute of Jawzjan province and is currently working on the project to build a helicopter.

According to Sediq, the work on the technical aspect of the helicopter has been completed and he is ready to build the helicopter.

On the other hand, an Afghan engineer has taken an initiative to build unmanned aerial vehicle – drone and aircraft flown by pilots.

Engineer Zmarai Helali has made drones and aircraft which are operated with fuel and electricity energy, and have been made by ordinary elements such as wood, clothes and electrical devices.

A teenager Afghan boy has also developed a small robotic excavator in a similar innovation which was demonstrated in ARG presidential palace in the presence of former President Hamid Karzai.