Weapons from Libya ‘fuel other wars’ 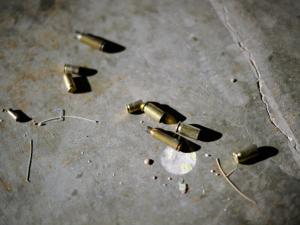 New York – Libyan weapons are spreading at “an alarming rate” to new territory in West Africa and the eastern Mediterranean, including Syria and the Gaza Strip, where they are fuelling conflicts and increasing the arsenals of armed groups and terrorists, a United Nations panel said.

In a report to the UN Security Council circulated on Tuesday, the panel said cases of illicit transfers from Libya in violation of a UN arms embargo that have been proven and are still under investigation involve more than 12 countries and include heavy and light weapons such as portable air defence systems, explosives, mines, and small arms and ammunition.

Since the uprising that ousted dictator Muammar Gaddafi in 2011, the panel said, “Libya has over the past two years become a significant and attractive source of weaponry in the region”.

It said civilians and militias remain in control of most weapons in Libya, adding that “the lack of an effective security system remains one of the primary obstacles to securing military materiel and controlling the borders”.

“In the past 12 months, the proliferation of weapons from Libya has continued at a worrying rate and has spread into new territory: West Africa, the Levant and, potentially, even the Horn of Africa,” the panel said. “Illicit flows from the country are fuelling existing conflicts in Africa and the Levant and enriching the arsenals of a range of non-state actors, including terrorist groups.”

The five-member expert panel made 28 visits to 15 countries in Africa, Europe and the Middle East including 10 visits to Libya. The 94-page report details arms trafficking cases that violate the embargo imposed after the 2011 uprising began as well as efforts to track down the financial assets of individuals and companies linked to Gaddafi and his regime that are on the UN blacklist.

The panel said it also examined evidence of the delivery of weapons and ammunition from Qatar and the United Arab Emirates to support the anti-Gaddafi revolutionaries during the uprising and considers that both countries violated the UN arms embargo, despite Qatar’s denial that it transferred any military materiel.

It cited a case of the transfer of ammunition to Libya involving the United Arab Emirates, Armenia, Albania and Ukraine, a separate case involving Sudan, and the reported transfer of a drone to the Libyan opposition by a Canadian company which Canadian authorities say is under investigation.

Last month, the Security Council eased sanctions on non-lethal military equipment for the Libyan government, but warned that the country is awash with illegal weapons.

The panel said the increased availability of Libyan weapons has empowered a variety of “non-state actors” engaged in conflicts against national authorities, and it expressed concern that extremist armed groups, who are the best financed, are strengthening their position.

“The lack of political and security stability, the continuing absence of control over stockpiles by the national authorities and delays in disarmament and weapons collections encourage illicit trading and have generated considerable money-making opportunities for traffickers,” the panel said.

It said the post-Gaddafi outpouring of arms has helped fuel the conflict in Mali where secular Tuareg rebels took half of the north as a new homeland in 2012 only to be ousted months later by Islamist Jihadists, many linked to al-Qaeda. When they suddenly headed south, France launched a military operation in January that routed them, though remnants remain.

The panel said it received confidential information that 30 portable air defence systems from Libya were bought from traffickers in Chad, and some were transported to the capital N’Djamena.

In a new trend, it said, illicit arms are being transferred by both land and sea toward the Levant in the eastern Mediterranean.

Egypt is facing an influx of arms from Libya, which present “a threat to its internal security” because some arms are likely to remain in Sinai for use against the government by insurgents, the panel said.

But it said the destination for the majority of arms from Egypt is the Gaza Strip, which is ruled by the militant Islamic group Hamas.

Syria, where a conflict that has killed more than 70 000 people is now in its third year, is also “a prominent destination for some Libyan fighters and Libyan military material”, the panel said.

It said weapons transfers have been organised by a range of actors in Libya, Syria, and in countries neighbouring Syria.

In the Horn of Africa, the panel said it had received evidence that various types of ammunition originating in Libya have been found in Somalia, where the Islamic extremist rebels of Al-Shabaab are still fighting the government.

Libya’s Prime Minister Ali Zidan told the Security Council last month that the government has controlled its borders with Algeria, Niger, Chad, Sudan and Egypt and is training police, the military and a national guard that will take security responsibility outside urban areas.

But despite efforts by the government to improve security, the panel said “the proliferation of weapons from Libya continues at an alarming rate”. – Sapa-AP