The Amur leopard is considered to be one of the most critically endangered big cats in the world, with just 35 remaining in the wild, all in the Russian Far East. It is one of ten living subspecies of leopard (according to the most recent genetic study) but it is especially distinctive due to a particularly pale golden coat compared to most other subspecies, and dark rosettes which are large and widely spaced with thick, unbroken rings. This beautiful golden leopard is well adapted to living in the harsh, cold climates of its range, with a thick coat that can grow as long as 7 cm in winter. Leopards give a distinctive rasping call, rather than a growl, as their main vocalization.

Leopards are predominately solitary and are active mainly during the night. Individuals occupy large, overlapping home ranges that vary in size depending on the abundance of prey.

Leopards are skilful hunters, stalking their prey to within a striking distance of a few metres, and feeding opportunistically on a wide range of animals. The Amur leopard feeds mainly on hares, roe deer and sika deer. 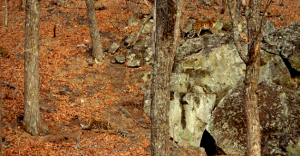 The range of the Amur leopard previously encompassed the Amur River basin and the mountains of northeastern China and the Korean peninsula .The Amur leopard can survive in any area that provides reasonable cover in temperate forests. Today, it survives only in one isolated population in the Russian Far East, although there may be a few individuals in the Jilin Province of northeast China.

Classified as Critically Endangered (CR) on the IUCN Red List. 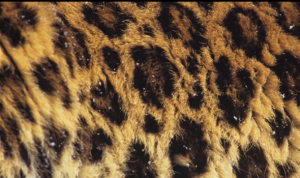 The Amur leopard has been systematically hunted out of most of its former range for its coat and for the bones that are used in Traditional Chinese Medicine. The local ungulates that make up the majority of this leopard’s prey have also been greatly depleted, leading the leopards to concentrate on domestic livestock, including farmed deer, and therefore inciting further persecution. The tiny population that survives today is under extreme risk of extinction; genetic variation is low in small populations and they are extremely vulnerable to any chance event such as an epidemic or large wild fire. Poaching remains a threat in Russia and annual wild fires rage through the area. In addition a variety of proposed economic development, including the building of an oil pipeline, threatens the last wilderness refuge of these big cats. 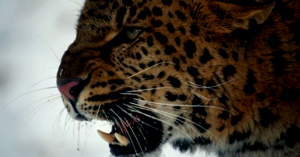 The leopard is protected but a proactive conservation effort is needed immediately if one of the most stunning of the big cats is to be saved from extinction. Efforts to save the Amur tiger in the same area are showing signs of success but the leopard has been largely overlooked until now. NGOs such as Phoenix, supported by funds from the Tigris Foundation, AMUR and the Zoological Society of London (ZSL), carry out anti-poaching patrols, firefighting and education programmes as well as providing compensation funds for local livestock.

Population monitoring and ecological studies are spearheaded by the Wildlife Conservation Society (WCS) working with Russian scientists. An area in China’s Jilin province has recently been set aside for the creation of a National Park, in order to safeguard the remnant population there. Moscow Zoo and the London Zoological Society oversee the captive breeding programme, which provides funds for conservation projects and acts as a reservoir of replacement stock for the wild should it be so needed. But there is still a huge amount of work to be done to prevent the imminent extinction of the Amur leopard.