US says deeply troubled by attack on sailors; suspects released 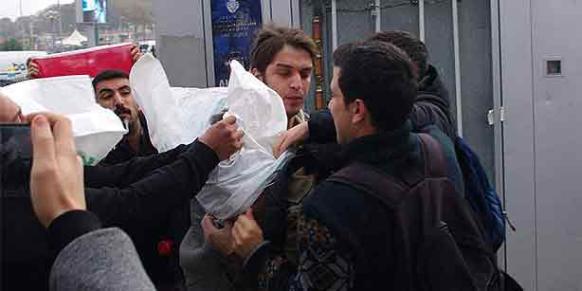 The police have released 12 ultranationalist protesters who were detained after an assault on three US soldiers, and the US Department of State has said that the US is deeply troubled by the assault, which occurred in the Eminönü neighborhood of İstanbul on Wednesday.

A group of ultranationalist Turkish protesters from the Turkish Youth Union (TGB) staged a demonstration in Eminönü on Wednesday morning to protest the docking of the US Navy’s Arleigh Burke-class destroyer USS Ross in İstanbul for four days after a NATO drill in the Black Sea. The TGB members tried to cover the heads of the sailors with sacks in an act reminiscent of a 2003 incident in which Turkish soldiers were captured by US forces in Iraq and had hoods put over their heads.

A total of 12 TGB members were detained by the Turkish police on Wednesday. At about 8:30 a.m. on Thursday, the detained TGB members were taken to Haseki Education and Research Hospital for medical examinations. After their medical examinations, the detainees were referred to the Çağlayan Courthouse, where they were released, but the suspects could still face charges for causing insult and injury.

When asked about the attack on the US sailors in İstanbul during a daily press briefing on Wednesday, US State Department Spokesperson Jen Psaki said: “We’re deeply troubled by today’s assault against sailors of the USS Ross in İstanbul. The USS Ross is visiting İstanbul as a sign of the longstanding cooperation and friendship between the United States and Turkey.”

Noting that the US supports the right to peaceful protest, Psaki also emphasized that this event in İstanbul clearly crossed the line from peaceful protest to violence and threats.

“We’re working — US officials, I should say, are working with Turkish authorities to investigate this incident.”

In response to a question on whether she sees this attack as an isolated incident or part of a trend of anti-Americanism in Turkey, Psaki said: “Well, I’m not sure what other incidents you’re comparing it to, so we believe that Turkey remains an important NATO ally. We work closely with them on a range of issues. Obviously, we’re looking at this specific incident.”… see more