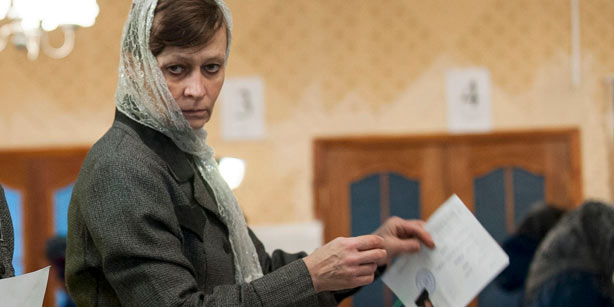 Ukrainians are electing a parliament on Sunday in a crucial vote tainted by the jailing of top opposition leader Yulia Tymoshenko and fears of election fraud.

With the charismatic former premier serving a seven-year sentence on abuse of office charges and the opposition split into two parties, President Viktor Yanukovych’s Party of Regions is expected to retain its parliamentary majority.

The West is paying close attention to the conduct of the vote in the strategic ex-Soviet state, which lies between Russia and the expanding European Union and is responsible for transporting energy supplies to many EU countries.

A strong showing by the Party of Regions will cement Yanukovych’s grip on power and likely turn Ukraine further away from the West. Ukraine’s relations with the US and the European Union have soured over the jailing of Tymoshenko, pushing Brussels to shelve a long-awaited partnership deal with Kiev. If the West turns a cold shoulder on Ukraine, Moscow is likely to court Kiev to create a greater economic and political alliance.

The pro-Western opposition groups hope to gain enough parliament seats to challenge Yanukovych’s power and undo what they call his undemocratic and harmful policies, such as the jailing of Tymoshenko and her top allies, the concentration of power in the hands of the president, the upgrading of the status of the Russian language, which some believe poses a threat to the Ukrainian tongue, waning press freedoms, a deteriorating business climate and growing corruption.

Dmitry Kovalenko, a 50-year-old entrepreneur in Kiev said he voted for Tymoshenko’s Fatherland party in hopes of ending Yanukovych’s monopoly on power.

“I am against repression,” Kovalenko said after casting his ballot in a polling station in central Kiev. “It’s easy to win when your opponents are in jail.”

But the opposition has been weakened with Tymoshenko, the 51-year-old heroine of the 2004 Orange Revolution that had ousted Yanukovych from power, in jail. Tymoshenko’s Fatherland party is running neck-to-neck with another pro-Western group, the Udar (Punch) party led by world boxing champion Vitali Klitschko.

Klitschko’s party has gained popularity in recent months, capitalizing on voter disappointment with both Yanukovych and Tymoshenko’s years in power, which were marked by a slow pace of reforms and constant bickering in the Orange camp.

“We’ve tasted both the orange and the blue and life hasn’t changed for the better,” said Zhanna Holovko, a 43-year-old high school teacher in Keiv referring to the campaign colors of the Orange revolution team and Yanukovych’s party. “I am voting for a third force that I can trust,” Holovko said after voting for Klitschko’s group.

The opposition’s failure to form a strong alliance has played into the hands of Yanukovych.

And while Tymoshenko’s and Klitschko’s parties are expected to make a strong showing in elections by party lists, half of the 450 seats in the Verkhovna Rada will be allocated to the winners of individual races where the Party of Regions are stronger. Yanukovych has centered his party’s campaign on bringing stability after years of infighting in the Orange camp and relative economic recovery after the global financial crisis, which hit Ukraine severely.

Also expected to get into parliament is the Communist party, which is expected to side with Yanukovych’s lawmakers. Another party that could pass the 5 percent threshold is the nationalist Svoboda (Freedom), a staunch government critic infamous for xenophobic and anti-Semitic statements.

Besides Tymoshenko’s jailing, which already raises big questions about the fairness of the vote, preliminary reports by international observers have identified numerous other problems during the election campaign. They include the use of state funds, bureaucracy and facilities by the ruling party in support of their candidates, media coverage on television tilted toward the Party of Regions, reports of intimidation of opposition candidates and the opposition’s fears of ballot stuffing and other vote fraud.