UK and German embassies in Sudan targeted in protests 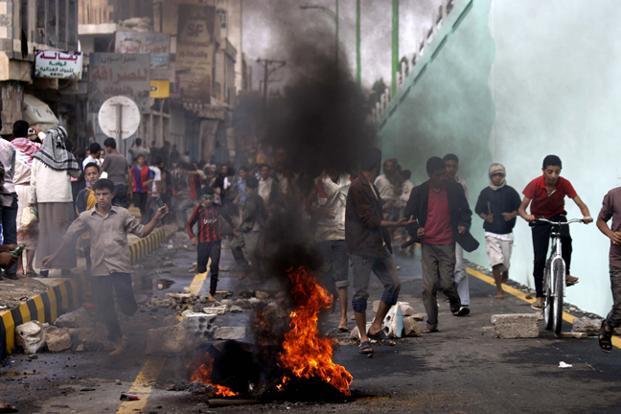 The UK and German embassies came under attack in Sudan Friday as unrest around the Muslim world continued to escalate over a US-made film mocking the Prophet Mohammed. The USA has put its embassies and consulates worldwide on high alert.

Anti-US protests by crowds whipped into fury by a film that ridicules Islam’s Prophet Mohammed erupted across the Arab world on Friday, leading to an explosion of violence in Sudan, Yemen and Lebanon.

The protests came after Muslims emerged from mosques in their thousands following the weekly Friday main prayers to voice their anger at the film, which shows the prophet sleeping with women, talking about killing children and referring to a donkey as “the first Muslim animal.”
In Khartoum, around 5,000 protesters stormed the embassies of Britain and Germany, which was torched and badly damaged, an AFP reporter said.

Police fired tear gas to disperse the protesters as several of them scaled the roof of the German embassy and others attacked its facade and tore down the flag to replace it with a black Islamist one, the reporter said.

In the Yemeni capital Sanaa, security forces fired warning shots and water cannon to disperse crowds of protesters trying to reach the US embassy, an AFP correspondent said.

In the northern Lebanese city of Tripoli, a crowd of 300 Islamists attacked and set fire to a KFC restaurant, an AFP correspondent said.

The attack on the US fast-food chain’s outlet came as Pope Benedict XVI arrived in Lebanon for a three-day visit, calling for Christian-Muslim coexistence and attacking religious extremism.

With much of the anger directed at the United States, where the film was made reportedly by a Coptic Christian and promoted by a rightwing pastor, Washington had earlier ordered security boosted at its embassies worldwide.

Protests in the region have been taking place since Tuesday, when US diplomatic missions in Libya and Egypt were attacked by crowds angered by the movie.

An American ambassador and three other US officials were killed in the Libya attack.

Protesters in Cairo early Friday again clashed with police outside the US embassy for a fourth straight day, although calm returned later in the day after the Muslim Brotherhood withdrew a call for nationwide demonstrations, saying it wanted to avoid loss of life and damage to property.

The Brotherhood’s about-turn came after Egyptian President Mohamed Morsi said during a visit to Rome on Friday that the film is an “aggression” on Islam that distracts from the real problems of the Middle East.

“We cannot accept this type of aggression and attempt to sow discord. These irresponsible actions yield no good and draw attention away from real problems like the conflict in Syria, the fate of the Palestinians and the lack of stability in the Middle East,” Morsi said.

Thousands of people yelling “Death to America” and “Death to Israel” meanwhile rallied in the centre of Tehran to protest the anti-Islam film.

State television showed the crowd streaming out after Friday prayers at Tehran University in which a hardline cleric, Ayatollah Ahmad Janati, blamed the United States for the crude film, which pokes fun at the Prophet Mohammed.

“It is a wonder how those running a country claiming to be a superpower become so stupid in taking such actions,” he said.

“In their recent lunacy, they have made a movie — whose finances are said to be paid by the Zionists — to insult the prophet,” he said.

The crowd responded by chanting “Death to America.”

Protests have spread across the Middle East and further afield, including to Bangladesh, Indonesia, Malaysia, Kashmir, Iraq, Israel and the Gaza Strip, Kuwait, Sudan and Tunisia.

US and Libyan officials meanwhile are probing Tuesday’s attack on the consulate in the eastern Libyan city of Benghazi that killed the ambassador and three other US officials, amid growing speculation it was the work of extremist militants rather than just demonstrators.

Washington sought to keep a lid on the demonstrations by spelling out that the controversial film that set off the violence was made privately by a small group of individuals with no official backing.

“Let me state very clearly — and I hope it is obvious — that the United States government had absolutely nothing to do with this video,” Secretary of State Hillary Clinton declared in condemning the “disgusting and reprehensible” video.

The catalyst for the bloody conflagration in the Muslim world was an amateurish film denigrating the Prophet Mohammed and linked to evangelical and Coptic Christians in the United States.

The suspected producer is Nakoula Basseley Nakoula, a 55-year-old Copt living in California. It was promoted on the websites of two other Americans, extremist Christian pastor Terry Jones and another Copt, Washington-based lawyer Morris Sadek.

Nakoula told American Arabic-language Radio Sawa that he had no regrets about making the film.

Both the State Department and the White House say there is nothing they can do to stop individuals producing inflammatory material because of freedom of speech laws enshrined in the First Amendment of the US constitution.