UK: Abu Hamza extradited to US 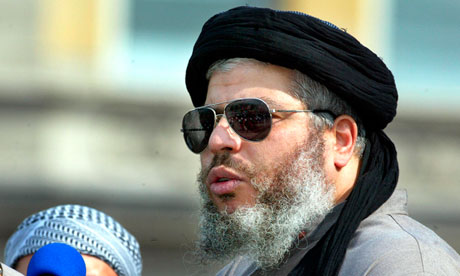 Islamist preacher Abu Hamza al-Masri was extradited Friday from the UK to the US where he will face a number of terrorism charges, after the High Court in London rejected his last-ditch appeal to avoid deportation.

The Egyptian-born Abu Hamza is accused by Washington of supporting al Qaeda, aiding a kidnapping in Yemen and plotting to open a training camp for militants in the United States.

The 54-year-old cleric, jailed in Britain for inciting followers to kill non-believers, also achieved notoriety for praising the Sept. 11 attacks on the United States and running a mosque in north London that Britain said was a hotbed of Islamist radicalism.

He was taken from a high-security prison in central England in a convoy guarded by large numbers of police to a U.S. airbase where he was handed over to U.S. officials and put on a plane to the United States.

Earlier, two London High Court judges dismissed his request to delay the proceedings in order to allow the cleric, who did not attend the hearing, to undergo a brain scan that his lawyers said would prove he was unfit to be extradited.

Instead, the judges said, “The sooner he is put on trial, the better.”

“It is unacceptable that extradition proceedings should take more than a relatively short time, to be measured in months not years,” they added.

Britain had vowed to extradite him as soon as possible after his appeal was rejected.

Hours later, he was on his way out of the country.

Four other terrorism suspects also lost their appeals against extradition and were put on two U.S. civilian jets provided by U.S. authorities to fly the suspects to the United States.

All five cases had been sent to the High Court after the European Court of Human Rights refused to stop London from extraditing them.

“It is right these men, who are all accused of very serious offences, will finally face justice in the U.S.,” Britain’s Home Office interior ministry said.

“We ensured plans were in place so these men could be handed over within hours of the court’s decision.”

“These individuals are being transferred to the United States,” the U.S. Embassy said in a statement after the ruling. “These extraditions mark the end of a lengthy process of litigation through the UK courts and the ECHR.”

As the judges read out their ruling, a crowd of about 100 people protested outside the London court, shouting, “Free Abu Hamza” and holding banners reading: “Stop extraditions” and “democracy = hypocrisy.”

A fiery anti-Western speaker, Abu Hamza is said to have inspired some of the world’s most high-profile militants including Zacarias Moussaoui, one of the accused Sept. 11 conspirators.

The cleric was once a preacher at the Finsbury Park Mosque in north London, but was later jailed in Britain for inciting murder and racial hatred.

Born Mustafa Kamel Mustafa, he moved to Britain as an engineering student in the 1970s, married a British woman and once worked as a doorman at discos in London.

Abu Hamza, who is famous for wearing a hook in place of his missing right hand, says he lost both hands and an eye while living in Afghanistan in the 1980s while carrying out humanitarian work. The authorities say he was fighting for the Mujahideen against the Soviet Union.

After being held on the U.S. extradition warrant, he was jailed for seven years by a British court in 2006 for inciting Muslims to kill Jews and non-believers, based on extracts of speeches he had given years earlier.

Hamza was indicted by a federal grand jury in new York in April 2004. He was accused of involvement in a 1998 hostage taking in Yemen that resulted in the deaths of four hostages – three Britons and one Australian.

He was also accused of providing material support to al Qaeda by trying to set up a training camp for fighters in Oregon in the United States and of trying to organise support for the Taliban in Afghanistan.