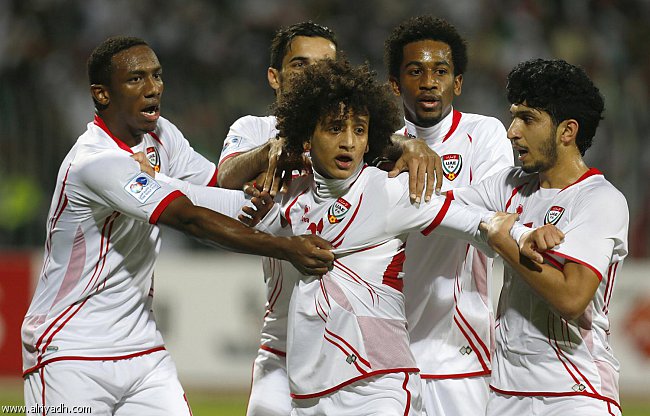 Hero Esmail Al Hammadi scored a winner in the second half of extra-time to hand the UAE a historic second Gulf Cup title in six years, beating Iraq 2-1 at Bahrain’s National Stadium in Manama on Friday.

Al Hammadi snuck up, with the scores level 1-1 and heading to penalties, to put the UAE into the record books after a tale of two halves where Omar Abdul Rahman had put the UAE ahead on half an hour only for Younus Mahmoud to equalise with ten minutes to play.

Omar Abdul Rahman fired the UAE ahead just before the half hour mark with a sensational lone run into the right of the box. He rounded four defenders and switched sides on Ali Adnan twice, before he struck with his left. It took a deflection off Ahmad Ebrahim’s leg to wrong-foot Iraq keeper Noor Sabri.

It followed an already bright start for the UAE where Ahmad Khalil had broken down the left only to see his tight angled shot palmed wide. From the subsequent corner by Omar, Khalil headed it onto Ali Mabkhout at the back post only to watch him scuff a free volley in front of goal.

Omar then had a freekick from the right of goal, just outside the area, tipped agonisingly over the posts by Sabri. But he made up for it moments later with his dazzling opener.

Iraq’s best chance came just before the interval, with Humam Tareq’s nearside shot, left of goal, plucked out of danger by UAE keeper Ali Khaseef. But despite flashes of early promise the UAE had contained Iraq and left them optionless, dominating with pressing tactics for much of the first half.

Ahmad Yaseen could have equalised for Iraq with a free header in front of goal, nodded straight at the keeper from a cross just after the break – before Amer Abdul Rahman put a long shot wide of the post for the UAE up the other end.

Khaseef was then forced to dive and tip Adnan’s screaming effort wide just before the hour as Iraq searched for a way back into the game. Ten minutes later it was Dhurgham Esmail’s chance to rattle the unshakable UAE keeper from range, but the effort was coolly absorbed.

Iraq finally broke the UAE down ten minutes from time when a throw in headed on by two Iraqi’s and tapped back by the third fell to Younus Mahmoud in the box, who blasted it in at the back post.

That effort had only reawoken the sleeping giants. Husam Ebrahim tried to round the keeper in a failed one-on-one and then he and Mohannad Abdul Raheem both missed a chance to head a winner before normal time.

With the first half of extra time passing off unnoticed the UAE’s Esmail Al Hammadi then ran onto a through ball to slot a winner under the arms of Sabri after 106 minutes. Ali Salem could have added a third but turned and shot over from a throwing and then Iraq’s chance of a comeback petered out when Tareq slumped at a chance in front of goal.