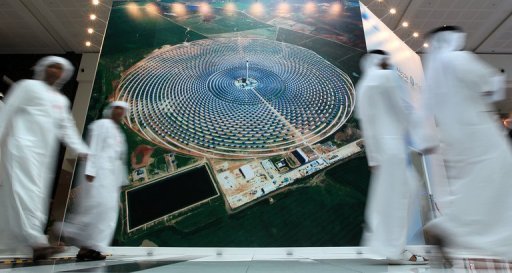 The UAE is well poised to offset rising energy demands now and in the future, say energy experts, with two massive new solar energy plants and the eventual addition of four new nuclear power generating plants now in the works.

The strategies to harness nuclear and solar energy have placed the UAE firmly inside what some experts cite as a $10 trillion (Dh36.7 trillion) industry globally working towards sustainable green energy for the future.The UAE’s contribution to global carbon emissions is about 0.2 per cent but per capita emissions are estimated at 37 tonnes, said officials.

With energy demands rising by 70 per cent within the next two decades globally, countries are scrambling to find not only green energy sources to balance the rising cost of petroleum but to also welcome green energies that generate sustainable economic growth.The UAE is part of a regional trend to move towards green energy — the six GCC (Gulf Cooperation Council) countries have sanctioned $155 billion worth of solar power projects that will generate 84 gigawatts when completed in 2017.Energy security has become crucial for sustainable development for all countries, especially the UAE — the second biggest Arab economy — officials said.“In order to protect our fossil fuel resources, we need to ensure that we are as efficient as possible in what we consume.

We have seen important steps in this direction, especially here in Dubai with its target of 30 per cent demand reduction by 2030,” said Suhail Mohammad Al Mazroui, Minister of Energy, earlier this year at an energy conference.One of those steps was the opening on Tuesday of Dubai’s first solar power project to feed electricity harnessed from the sun into the power grid.Leaders and energy officials flipped the switch on the first phase of project, said to cost Dh120 million, as part of the overall Dh12 billion project to be completed in years to come.

A 13 megawatt solar project, phase one of the 280,000 square metre Shaikh Mohammad Bin Rashid Solar Park, was inaugurated by His Highness Shaikh Mohammad Bin Rashid Al Maktoum, Vice-President and Prime Minister of the UAE and Ruler of Dubai, at Seih Al Dahal, 50 kilometres south of Dubai.The project, undertaken by the Dubai Supreme Council of Energy (DSCE) and operated by Dubai Electricity and Water Authority (Dewa), is expected to generate 24 million kilowatts of power per year.Dubai is certainly not alone in its push to diversify energy sources for power generation.In April, in a major push to diversify its own energy sources in the UAE, Abu Dhabi turned on what it called the world’s largest solar power plant.The $600 million (Dh2.2 billion), 100 megawatt Shams 1 — located 120 kilometres south-west of the capital — was constructed to lessen dependency on oil-power electricity generating stations.With economies of scale and better know-how, the cost of electricity produced from photovoltaics (the use of solar panels to convert sunlight into electricity) could become significantly lower than diesel.

While the cost of producing electricity from conventional, fossil fuel-based energy sources is rising in the world, the cost of electricity generation from renewable energy continues to come down.The Abu Dhabi-based Masdar appointed the bidding consortium of Total and Abengoa Solar as a partner to own, build and operate Shams 1. Masdar holds a 60 per cent stake in the venture, while Total and Abengoa Solar each hold a 20 per cent stake.Shams 1 will contribute towards Abu Dhabi’s target of achieving seven per cent renewable energy power generation capacity by 2020. Power demand in Abu Dhabi is growing rapidly and is expected to reach 20 gigawatts by 2020.

Shams 1 extends over an area of 2.5 square kilometres and will feed power to the UAE national grid. Work on the project started in the third quarter of 2010 with the stated purpose of generating enough energy to power 20,000 homes. The solar project began feeding electricity to the grid earlier this year.On the nuclear front, the UAE is well on schedule to commission the first of four planned nuclear power plants by May, 2017 to be followed with an additional nuclear power coming online each year until 2020, when all four nuclear power plants should be up and running.The Emirates Nuclear Energy Corporation is building a total of four nuclear energy plants in Barakah, in the Western Region of Abu Dhabi.With four plants online by 2020, nuclear energy will deliver up to a quarter of the nation’s electricity needs, while saving the UAE up to 12 million tonnes of carbon emissions each year.