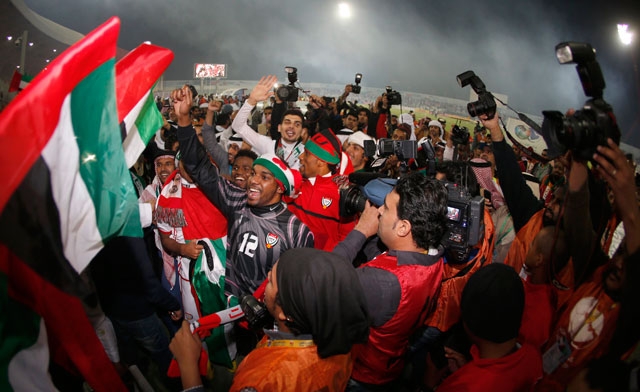 The UAE beat Iraq 4-2 in penalty shootout to enter the final of the 23rd Arabian Gulf Cup in Kuwait City on Tuesday late night.

After 120 minutes of normal and extra-time failed to find a winner, it was turn of the lotteries.

The UAE meant business with strikers Ali Mabkhout and Ahmed Khalil in the lineup. The match was tactical and physical in equal measure. There were some 15 fouls in the first phase of play. Iraqi players, as expected, kept tab on Omar.

And high stakes in the clash meant there was no let from either side. In 15 minutes, a free kick into the box from Omar had Habib Fardan and keeper Jalal Hassan threw themselves in the line of fire. There was a good delay in play as the keeper needed medical attention.

Attempts on goal were hard to come by as midfielders orchestrated proceedings only to be denied by defenders at the point of final assault. The UAE had at least three clear attempts on goal. There was a good chance missed as Al Menhali dashed through the right flank dribbling past defenders but was denied by post. The striker could’ve passed onto Ali Mabkhout who was open and unchecked. On another occasion, Mabkhout controlled the cross well to dodge past defenders but ended with a frail shot… see more