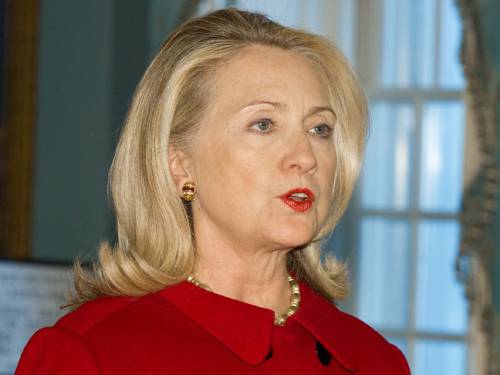 KABUL, Afghanistan –  The Obama administration on Saturday declared Afghanistan the United States’ newest “major non-NATO ally,” an action designed to facilitate close defense cooperation after U.S. combat troops withdraw from the country in 2014 and as a political statement of support for Afghanistan’s long-term stability.

U.S. Secretary of State Hillary Rodham Clinton made the announcement shortly after arriving in the country for talks with Afghan President Hamid Karzai.

“We see this as a powerful commitment to Afghanistan’s future,” she said at a news conference in the grand courtyard of Kabul’s Presidential Palace. “We are not even imagining abandoning Afghanistan.”

Clinton insisted that progress was coming incrementally but consistently to the war-torn nation after decades of conflict. “The security situation is more stable,” she said. Afghan forces “are improving their capacity.”

At the news conference, Karzai welcomed Clinton to Kabul and thanked the U.S. for its continued support.

Clinton repeated the tenets of America’s “fight, talk, build” strategy for Afghanistan. The goal aims first to defeat dangerous extremists, win over Taliban militants and others willing to give up violence and help in the long reconstruction of Afghanistan ahead.

Fighting still rages as Afghan and U.S.-led coalition forces battle insurgents in the mostly eastern part of the country. Although casualties have fallen among foreign forces as the United States and other nations begin a gradual withdrawal, 215 coalition soldiers were killed in the first six months of the year — compared to 271 in the same period last year.

Reconciliation efforts haven’t gained steam, but Clinton said she was pleased to be meeting the foreign ministers of Afghanistan and Pakistan together in Tokyo — a three-way relationship seen as key to stabilizing Afghanistan.

From Kabul, Clinton and Karzai were heading separately to Japan for an international conference on Afghan civilian assistance. Donors were expected to pledge around $4 billion a year in long-term civilian support.

Clinton stressed the importance of the pledges for civilian aid. Afghanistan’s cash-strapped government is heavily dependent on foreign largesse, and any significant drop-off in financial assistance after 2014 could set back the country’s development.

Asked about the systemic corruption that has plagued the Afghan government, Clinton said the U.S. was working hard with Afghan authorities to eliminate fraud, mismanagement and abuse. She said the meeting in Tokyo would include accountability measures to ensure that money sent to Afghanistan benefits the Afghan people.

“This is an issue the government and the people of Afghanistan want action on, and we want to ensure they are successful,” Clinton said.

Nations that once gave more generously to Afghanistan are now seeking guarantees that their taxpayer money will not be lost to corruption and mismanagement.

International donors say that many promises to crack down on corruption have not been carried out. Some highly placed Afghan officials have been investigated for corruption but seldom prosecuted, and some of the graft investigations have come close to the president himself.

In Tokyo, representatives from some 70 countries and organizations will establish accountability guidelines to ensure that Afghanistan does more to improve governance and finance management, and to safeguard the democratic process, rule of law and human rights — especially those of women.

On the major non-NATO ally designation, Clinton said Afghanistan would have access to U.S. defense supplies and training and cooperation.

“This is the kind of relationship that we think will be especially beneficial as we plan for the transition,” she said. “It will help the Afghan military expand its capacity and have a broader relationship with the United States.”

Designating Afghanistan as a major non-NATO ally was part of a Strategic Partnership Agreement signed by Presidents Barack Obama and Karzai in Kabul at the beginning of May.

On July 4, the U.S. ambassador to Afghanistan, Ryan Crocker, and the country’s foreign minister announced that the two countries had completed their internal processes to ratify the agreement, which has now gone into force.

The declaration allows for streamlined defense cooperation, including expedited purchasing ability of American equipment and easier export control regulations. Afghanistan’s military, which is heavily dependent on American and foreign assistance, already enjoys many of these benefits. The non-NATO ally status guarantees it will continue to do so.

Afghanistan becomes the 15th such country the U.S. has declared a major non-NATO ally. Others include Australia, Egypt, Israel and Japan. Afghanistan’s neighbor Pakistan was the last nation to gain the status in 2004.

Clinton arrived in Afghanistan from Paris, where she attended a 100-nation conference on Syria.