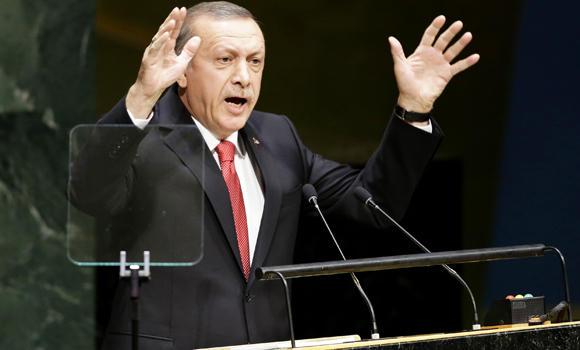 ISTANBUL: President Tayyip Erdogan said on Wednesday Turkey would fight against Islamic State and other “terrorist” groups in the region but said it would stick to its aim of seeing Syrian President Bashar Assad removed from power. “We will fight effectively against both ISIL (Islamic State)and all other terrorist organizations within the region; this will always be our priority,” Erdogan said, according to the text of his speech at the opening of parliament.

“We will (also) continue to prioritize our aim to remove the Syrian regime, to help protect the territorial integrity of Syria and to encourage a constitutional, parliamentary government system which embraces all (of its) citizens.”

Backing words with action, Turkish police on Wednesday detained three students suspected of being IS sympathizers following clashes at an anti-jihadist campus protest at Istanbul University, reports said.
Police stormed the university’s faculty of humanities and science in Istanbul’s Beyazit district after Islamist students armed with sticks and stones attacked another group protesting against IS.
Three students were detained after being identified by police as IS supporters because they were wearing black masks and hats during the fight earlier Wednesday, Hurriyet newspaper reported on its website.
“We are Muslim students. Long live Muslim students. We Muslims are one body,” they reportedly chanted during the protest.

Dozens of riot police officers as well as armored vehicles and water cannon trucks were deployed around the university after the early morning raid. Istanbul University has in the last few days been the scene of clashes between leftist students denouncing the brutality of the IS jihadists and the group’s sympathisers. On Friday, an anti-IS protest turned violent when masked assailants attacked a group of students with sticks studded with nails. One student was injured in the head when a glass bottle was thrown at him… see more