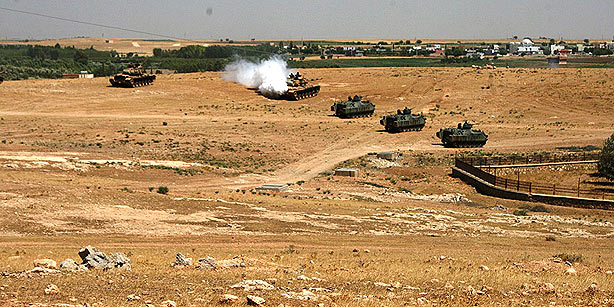 Turkey’s military struck targets inside Syria on Wednesday in response to a mortar bomb fired from Syrian territory which killed five Turkish civilians, Prime Minister Recep Tayyip Erdo?an’s office said in a statement.
“Our armed forces in the border region responded immediately to this abominable attack in line with their rules of engagement; targets were struck through artillery fire against places in Syria identified by radar,” the statement said.

“Turkey will never leave unanswered such kinds of provocation by the Syrian regime against our national security,” it added.

There were no immediate details of the Turkish strikes against Syria, nor was it clear who had fired the mortar into Turkish territory.

He added that Syria was investigating the source of the mortar bomb that killed five civilians and urged restraint after Turkey’s military struck targets inside Syria.
Syria’s Information Minister Omran Zoabi conveyed his condolences to the Turkish people, saying his country respected the sovereignty of neighboring countries. He also called on other countries to respect Syria’s sovereignty and to control their borders to stop gunmen from entering Syria.

Despite calls by Damascus for restraint, Turkish Parliament is set to vote on a motion that will authorize Ankara’s right to retaliate against Syria if necessary.

Davuto?lu had also agreed with NATO Secretary-General Anders Fogh Rasmussen on the need for an emergency meeting of NATO members, the statement said.

A mortar bomb fired from Syria landed in a residential district of the southeastern Turkish town of Akçakale on Wednesday, killing a woman and four children from the same family and wounding at least 13 other people.

A cloud of dust and smoke rose up over low-rise buildings as residents ran to help the wounded. Others, infuriated by the increasing spillover of violence from Syria’s civil war, took to the streets shouting protests against the local authorities.

Davuto?lu phoned UN Secretary General Ban Ki-moon to brief him about the incident and also spoke with senior military officials and Syria crisis mediator Lakhdar Brahimi, his ministry said in a statement.

Davuto?lu signaled over the weekend that Turkey would take action if there was a repeat of a mortar strike which damaged homes and workplaces in Akçakale last Friday.

“It (latest mortar round) hit right in the middle of the neighbourhood. The wife and four children from the same family died,” Ahmet Emin Me?hurgül, local head of the Turkish Red Crescent, told Reuters, adding he knew the victims personally.

“People here are anxious, because we got hit before. Security forces tried to convince people to empty the neighbourhood near the border, but now we’ve been hit right in the middle of the town,” he said.
A Reuters witness saw three police officers among the wounded being taken to hospital.

Erdo?an long cultivated good relations with Assad but became a harsh critic after Syria’s popular revolt began last year, accusing him of creating a “terrorist state”. Erdo?an has allowed Syrian opposition fighters to organize on Turkish soil and pushed for a foreign-protected safe zone inside Syria.

The Obama administration said it is “outraged” by the Syrian mortar shell. Secretary of State Hillary Rodham Clinton says the US is consulting its NATO ally on what she termed a “very dangerous situation.”

She also spoke to her Turkish counterpart later on Wednesday.

Speaking in Washington, Clinton said Syria’s leaders were causing untold suffering to their own people, driven solely by their desire to cling to power.

The White House strongly condemned Syria’s deadly shelling across its border with Turkey, saying “we stand with our Turkish ally.”

“All responsible nations must make clear that it is long past time for Assad to step aside, declare a ceasefire and begin the long-overdue political transition process,” White House spokesman Tommy Vietor said, referring to President Bashar al-Assad’s bloody crackdown on an uprising against his rule.

The White House responded with a declaration of support for NATO partner Turkey after the mortar strike from Syria. “We stand with our Turkish ally and are continuing to consult closely on the path forward,” Vietor said.

Rasmussen told Davuto?lu in a phone conversation on Wednesday that he strongly condemned the mortar strike from Syria, a NATO spokeswoman said.

The spokeswoman said NATO continued to follow developments in the region “closely and with great concern”.

Davuto?lu earlier had contacted Rasmussen, who has said repeatedly that NATO has no intention of intervening in Syria but stood ready to defend NATO member Turkey, if necessary.

A NATO official, who spoke on condition of anonymity because of NATO rules, said the meeting in Brussels was being held under a treaty article that states “the parties will consult whenever, in the opinion of any of them, the territorial integrity, political independence, or security of any of the parties is threatened.”

Turkey, a NATO ally, is anxious to avoid going into Syria on its own. It has been pushing for international intervention in the form of a safe zone, which would likely entail foreign security forces on the ground and a partial no-fly zone.

However, the allies fear military intervention in Syria could ignite a wider conflict, and few observers expect robust action from the United States, which Turkey views as vital to any operation in Syria, ahead of the presidential election in November.

NATO demanded an immediate halt to “aggressive acts” against alliance member Turkey after the mortar strike from Syria.

The shelling “constitutes a cause of greatest concern for, and is strongly condemned by, all allies”, NATO ambassadors said in a statement, after they held a rare late-night meeting at Turkey’s request to discuss the incident.

“The alliance continues to stand by Turkey and demands the immediate cessation of such aggressive acts against an ally, and urges the Syrian regime to put an end to flagrant violations of international law,” the statement said.

“This latest incident is the last straw. Turkey is a sovereign country. There was an attack on its territory. There must certainly be a response in international law. … I hope this is Syria’s last craziness. Syria will be called into account,” said Turkish Deputy Prime Minister Bülent Ar?nç.

“There must be a response to this under international law,” he said, according to Turkey’s Cihan news agency.

UN spokesman Martin Nesirky told reporters that Ban spoke with Davuto?lu and “encouraged the minister to keep open all channels of communications with the Syrian authorities with a view to lessening any tension that could build up as a result of the incident.”

That statement was issued before Turkey’s announcement that it had struck targets inside Syria.

In a second statement issued shortly after Turkey’s announcement, Ban urged the Syrian government to respect the territorial integrity of its neighbors and warned that the 18-month-long conflict in Syria was increasingly harming other countries in the region.

“The Secretary-General calls on the Syria Government to respect fully the territorial integrity of its neighbors as well as to end the violence against the Syrian people,” Ban’s press office said in a statement.

“Today’s incidents, where firing from Syria struck a Turkish town, again demonstrated how Syria’s conflict is threatening not only the security of the Syrian people but increasingly causing harm to its neighbors,” it said.

The statement called on all sides in the Syrian conflict to work towards peaceful resolution of the crisis.

Asked about the incident on the Turkish-Syrian border, Lyall Grant told reporters: “It’s very worrying, and it was raised and discussed briefly in the council this afternoon.”

He added that the council was now awaiting a letter from Turkey on the incident before it considered possible moves.

The 15-member council was already in a meeting to discuss other issues when Turkey announced it had struck targets in Syria. It is the most serious cross-border escalation of the Syria uprising, which began as peaceful pro-democracy protests.

When asked if the Security Council would get involved, US Ambassador to the United Nations Susan Rice told reporters: “We’ll wait to see.”

The council has been deadlocked on the Syria for more than a year. Russia, a staunch ally of Syrian President Bashar al-Assad, and China have vetoed three resolutions condemning Assad’s government and rejected the idea of imposing sanctions.

Turkish Foreign Ministry said in a statement late on Wednesday that Davuto?lu has been assured of Washington’s full support at the United Nations and NATO after the mortar bomb fired from Syria.

“Over the last 20 to 25 days there have been very heavy clashes on the Syrian side. We have felt the effects of these in Akçakale,” Labor Minister Faruk Çelik, an MP for the province where Akçakale is located, told parliament.

In April, Turkey reported an incident to the United Nations in which at least five people, including two Turkish officials, were wounded when cross-border gunfire struck a Syrian refugee camp in Kilis, further west along the frontier.

Turkey beefed up its troop presence and air defences along its 900-km (560-mile) border after Syria shot down a Turkish reconnaissance jet in June. But residents in Akcakale said there was still not enough security.

“People here are rising up, there is no security. People were chanting for the local governors to resign,” local resident ?brahim Halil Arslan told CNN Turk television.

“Everybody here is so anxious. We keep our children locked at home, and we are trying to live under this psychological pressure,” he said.

Washington sees Turkey as the pivotal player in backing Syria’s opposition and planning for the post-Assad era. But Ankara has found itself increasingly isolated and frustrated by a lack of international consensus on how to end the conflict.

Turkey is also sheltering more than 90,000 refugees from Syria and fears a mass influx similar to the flight of half a million Iraqi Kurds into Turkey after the 1991 Gulf War.