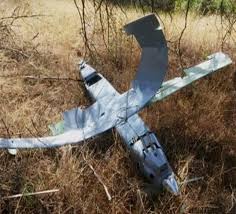 Turkish fighter jets downed a drone whose nationality could not be determined near its border with Syria on Friday after it failed to leave Turkish air space after warnings, Turkish authorities said.

The aircraft, which Foreign Minister Feridun Sinirlioğlu later said was a drone, was warned three times before the Turkish planes fired at it, a statement released by the General Staff said. The statement came after the General Staff announced that a high-level Russian military delegation had visited Turkey for talks on violation of Turkish air space by Russian aircraft on Oct. 3-4. The Russian delegation shared information to clarify the reasons behind the violations of the Turkish air space that took place on Oct. 3-4 and to prevent the repetition of such violations, according to an official statement on Thursday.

Private broadcaster CNN Türk said the drone was shot downby Turkish F-16s within Turkish borders and that it crashed near the southern province of Kilis. Foreign Minister Sinirlioğlu said that the drone was shot down 3 kilometers inside the Turkish border. “The nationality of the drone has not yet been determined. It will be made public when it is determined,” he told a press conference in Ankara.
In a statement that came after the Turkish announcement, the Russian Defense Ministry said all its planes in Syria had safely returned to base and all its drones were operating “as planned,” the RIA Novosti news agency reported. However, the United States suspects the plane that Turkey shot down was a Russian drone aircraft, a US official told Reuters, cautioning that the information was still preliminary.

Russian jets violated Turkish air space on two occasions earlier this month and Turkey has warned it will respond if the incursions are repeated. Turkey has also reported unidentified aircraft and Syria-based missile air defense systems harassing its warplanes several times in recent months.
The downing of the drone highlights the risks to NATO member Turkey as Syrian, Russian and US coalition aircraft fly combat missions close to its borders.

Russian and Turkish planes had 13 dangerous encounters between Oct. 3 and Oct. 10, Turkish Deputy Foreign Minister Ali Kemal Aydın was quoted as saying by Russian news agencies during a visit to Moscow.

He added that the encounters happened close to the border with Syria.
Russia’s air strikes in Syria mean that Russian and NATO planes are now flying combat missions in the same air space for the first time since World War Two, heightening concern that the Cold War enemies could fire on each other.