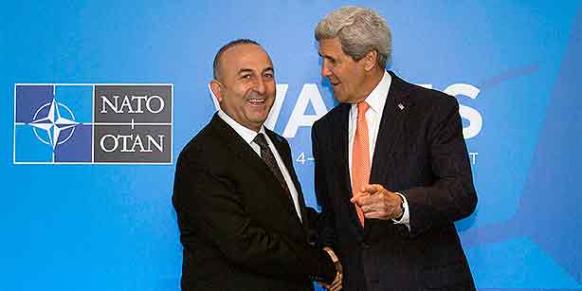 Turkey is likely to be part of a 10-country coalition led by the US, along with the UK, France, Germany, Canada, Australia, Italy, Poland and Denmark, against the threat of the terrorist Islamic State of Iraq and the Levant (ISIL) — which calls itself the “Islamic State.”

US Secretary of State John Kerry and Secretary of Defense Chuck Hagel held a private meeting with the foreign and defense ministers of the nine other countries on Friday, on the sidelines of the NATO summit in Wales.

Hagel is also scheduled to visit Turkey this weekend as part of US efforts to build a coalition against ISIL.

The morning meeting was a late addition to the NATO summit, and it is part of a broader US strategy to bring more nations into the fight against the ISIL militants, who have taken control of large swaths of northern and western Iraq as well as land across the border in Syria.

Kerry said leaders need a clear strategy and solid idea of what each country will contribute to the fight. And while noting that many will not be willing to engage in military strikes, he said they can instead provide intelligence, equipment, ammunition or weapons, The Associated Press reported.

“We have the technology, we have the know-how,” Kerry said. “What we need is obviously the willpower to make sure that we are steady and stay at this.”

US President Barack Obama’s administration has been working on building a coalition against the ISIL threat for some time. Hagel, sitting alongside Kerry in the meeting, said the group of 10 nations represents a core coalition that will be needed to face the insurgent challenge. He said the group can then be expanded as necessary.

The US is pressing a core coalition to pursue ISIL in Iraq militarily as well as financially, with the hope of building a plan by the time of the UN General Assembly in New York in about two weeks. Kerry said there are “implications about Syria in this” and suggested they could discuss those later on Friday…. see more