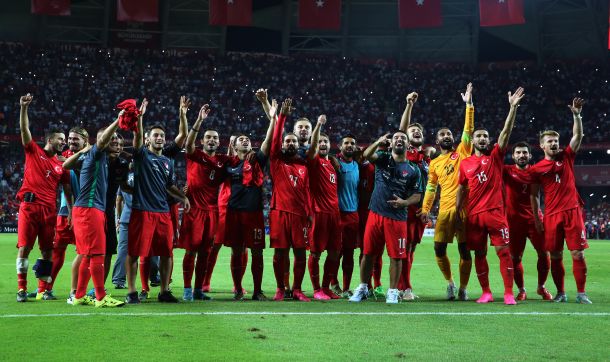 Turkey beat the Netherlands 3-0 at Konya’s Torku Arena Stadium on Sunday in a key encounter for the third spot in Group A, whose winner will make it to the playoffs and have another chance for a ticket to Euro 2016 in France.

The Turks and the Dutch lost their chance for the top two spots in Group A, in other words, an automatic entry into the top European football competition, while Thursday’s results threw the race for the much-eyed third spot wide open. Turkey drew Latvia 1-1 in front of a packed stadium in Konya last Thursday. On the same day, the Netherlands lost to Group A leaders Iceland 1-0 in Amsterdam.

Fatih Terim’s men have garnered 12 points so far and are now ranked third in their group for Euro 2016. Kazakhstan is ranked last place in the group, while Iceland is ranked first and Czech Republic second. The other two teams in Group A, the Netherlands and Latvia, ranked in fourth and fifth place respectively. However, there are still two more matches to be played in the upcoming weeks to determine those two teams who will be granted the right to continue in Euro 2016. Those teams, who finish their group as third teams, will hold additional paly-off matches with third teams of other groups to be able to continue their paths in Euro 2016. The best team of the play-off will be granted the right to attend the finals of Euro 2016… see more