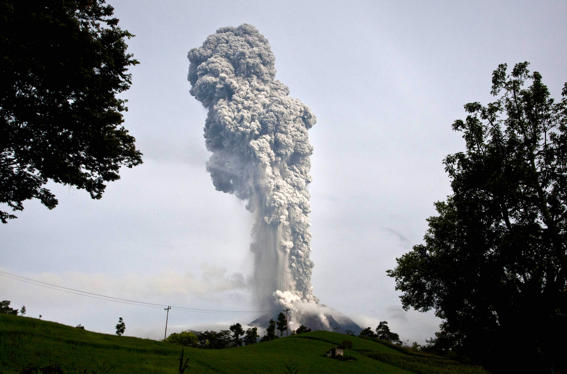 Super heated ash and gas flowing down the slopes of Indonesia’s Sinabung volcano signals the intensity of eruptions may be increasing at the fiery mountain, according to local officials.

More than 5,000 people have been evacuated from towns and villages in North Sumatra’s Karo Regency since Mount Sinabung awoke in October after a three-year dormancy. Karo is an agricultural region that supplies vegetables for surrounding islands. The evacuation and devastating ash fall have affected crop harvests, leading to higher prices on vegetables and chilies elsewhere in Indonesia, according to theJakarta Post.

The Indonesian Center for Volcanology and Geological Hazard Mitigation warned people not to approach within 2 miles (3.2 kilometers) of Mount Sinabung.

On Monday (Nov. 11), a pyroclastic flow, a fast-moving avalanche of ash, lava fragments and air, was seen racing down the peak. Since then, the volcano has blasted out one to two ash explosions every day. Lava has flowed more than 1,000 meters (3,200 feet) from the top of the volcano.

Indonesia lies in the Pacific “Ring of Fire,” an area of crustal collision zones that is the cause of a great number of earthquakes and volcanoes. The island nation has more than 130 active volcanoes. The world’s most deadly volcanic eruption in recent years was at its Mount Merapi in 2010, which killed more than 350 people.