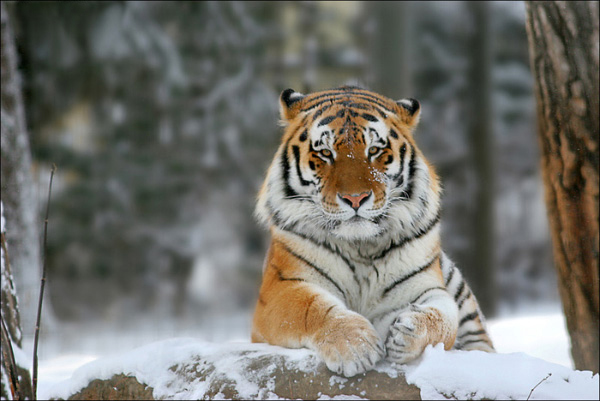 The Siberian tiger is a tiger subspecies inhabiting mainly the southwest Primorye Province in the Russian Far East. The population had been stable for more than a decade due to intensive conservation efforts, but partial surveys conducted after 2005 indicate that the Russian tiger population is declining.

The Siberian tiger is reddish-rusty, or rusty-yellow in color, with narrow black transverse stripes. The body length is not less than 150 cm (60 in), condylobasal length of skull 250 mm. 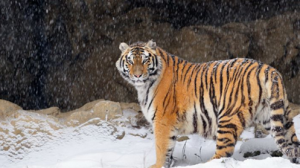 The ground color of Siberian tigers’ pelage is often very pale, especially in winter coat. The fur of the Siberian tiger is moderately thick, coarse and sparse compared to that of other felines. The summer coat is coarse, while the winter coat is denser, longer, softer, and silkier. The winter fur often appears quite shaggy on the trunk, and is markedly longer on the head, almost covering the ears. The background color of the winter coat is generally less bright and rusty. 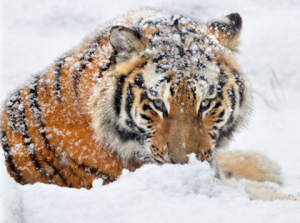 The geographical range of Amur tigers in the Russian Far East stretches south to north for almost 1,000 km. They also occur within the Eastern Manchurian mountain system. In both regions, peaks are generally 500 to 800 m (1,600 to 2,600 ft) above sea level, with only a few reaching 1,000 m (3,300 ft) or more near the southern limits of their distribution in the central Sikhote-Alin Mountains.

An unknown number of tigers survive in the reserve areas around Baekdu Mountain, based on tracks and sightings.

In April 2014, World Wide Fund for Nature personnel captured a video of a Siberian tigress with cubs in inland China.

Between January 1992 and November 1994, 11 tigers were captured, fitted with radio-collars and monitored for more than 15 months in the eastern slopes of the Sikhote-Alin mountain range. Results of this study indicate that their distribution is closely associated with distribution of red deer, while distribution of wild pigs was not such a strong predictor for tiger distribution. 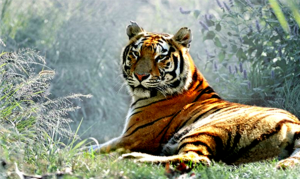 The winter of 2006–2007 was marked by heavy poaching. Poaching of tigers and their wild prey species is considered to be driving the decline, although heavy snows in the winter of 2009 could have biased the data.

Tigers are included on CITES Appendix I, banning international trade. All tiger range states and countries with consumer markets have banned domestic trade as well. At the 14th Conference of the Parties to CITES in 2007, stronger enforcement measures were called for, as well as an end to tiger farming.

In 1992, the Siberian Tiger Project was founded, with the aim of providing a comprehensive picture of the ecology of the Amur tiger and the role of tigers in the Russian Far East through scientific studies. By capturing and outfitting tigers with radio collars, their social structure, land use patterns, food habits, reproduction, mortality patterns and their relation with other inhabitants of the ecosystem, including humans is studied.

In August 2010, China and Russia agreed to enhance conservation and cooperation in protected areas for Amur tigers. China has undertaken a series of public awareness campaigns including celebration of the first Global Tiger Day in July 2010, and International Forum on Tiger Conservation and Tiger Culture.

In December 2010, the Wildlife Conservation Society (WCS Russia) and Phoenix Fund initiated a project in co-operation with the Zoological Society of London (ZSL) to improve the protection of tigers and prey species in four key-protected areas.

The first project results indicate a success. Patrol efforts (measured by total time spent on patrols and distance of foot patrols) in the two protected areas where the project started first has increased substantially.