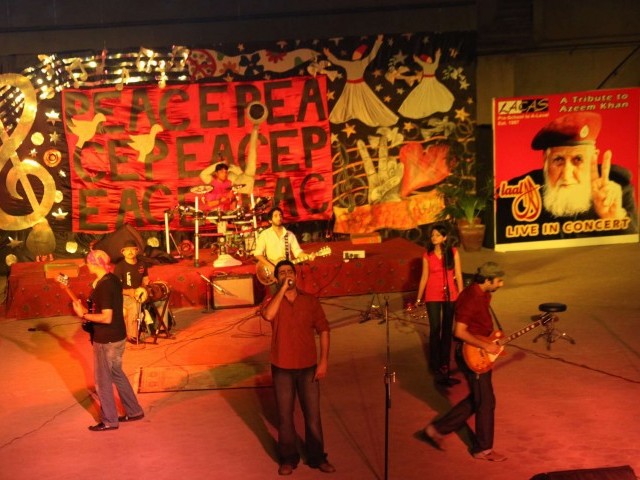 It is known for its political and socialist lyrics based on the writings of Pakistani poets Faiz Ahmed Faiz and Habib Jalib. It projects itself as a progressively political youth movement launched through music, a ‘liberal’ band fighting for a fair and just system. The most vocal member is Dr.Taimur Rehman who also likes to be called Taimur Laal.He teaches political science at LUMS since 2002 and is the spokesperson for Laal and a political activist.

The Laal group are Marxists, that is why the name is Laal, meaning red, it is rather surprising as today Marxism is a spent force facing its eventual demise.

Communism and its offshoots have never really achieved a fan base in Pakistan, Laal has 4 million likes on its Facebook page due to their music, most of the following are university students. When Dr.Taimur Laal or Rehman was asked how he visualises Pakistan in the future, he replied as a socialist state. That does not seem likely at all, the attempt for a red revolution seems to distract from the real purpose.

Last year, the Laal page was blocked by Facebook due to complaints. Taimur Rehman said the blocking of the page was indicative of diminishing space for liberals in the country.
“If you have progressive or liberal views you will be gunned down or silenced but if you have extremist views and take up arms Pakistan will give you the status of a stakeholder in power and negotiate with you,” he said.

So much for what he says, it has always seemed like the Pakistani so-called liberals are also a type of extremists, and rather fascist in their approach. They have ignored or cynically dismissed anything to do with the army, the nation’s ideology and religion, they look down upon all patriots, their own contribution to Pakistan’s progress is negligible. A true Pakistani liberal is nothing more than a parasite, feeding off the same land it tries to destroy.

Laal has also taken upon itself the task of resolving any instability in Baluchistan, recently a seminar called ‘Unsilencing Baluchistan’ was organised at LUMS university, where Dr.Taimur Rehman teaches. The panel consisted of various individuals calling themselves human rights activists, foremost among them being a person called Mama Qadeer Baloch.

It is quite a mystery why they havnt tackled and contacted the TTP (Pakistani Taliban), big city mafias or the Lyari gangs to ‘un-silence’ them,and only concentrating on getting publicity for the Baluchistan situation.

This is a task for law-enforcement agencies and government officials, it is in extremely bad taste for a university to become a platform for persons wanted by the law. The whole matter has compromised and made the LUMS university look questionable and supportive of traitors, no world-class university supports terrorists or traitors, inviting them to seminars.

It is not the responsibility of LUMS and Dr.Taimur Rehman to keep in touch with persons such as these, it shows an intention to support anti-state activities. Nothing could have destroyed LUMS, credibility and reputation better than this incident.

‘It is a lesser known fact that Dr.Taimur Laal, s own uncle by the name of Asad Rehman, had at one time fought against the Pakistan army in Baluchistan in 1970. While studying in London, Asad Tehman had become a KGB and RAW asset, he returned to Pakistan and organised an insurgency in Baluchistan. The Dr.Taimur and Mama Qadeer connection actually goes back a long way, the family history betrays a stronger involvement with BLA.  Asad Rehman died in 2012, in the newspaper obituary he was called a human rights activist.

Human rights and freedom of speech are nowadays an effective guise to hide anti-state activities and leanings destructive for Pakistan.

Colourful pop music performances are used to lure the youth in Pakistan and then set them on the path to being a rebel against the system. When the same youth goes abroad for studies, they become even more set in their views. Most of the ‘extremist liberals’ in Pakistan today have studied in top U.S. universities.

Baluchistan has gradually settled down, and is on the path towards peace and prosperity, specially after Gwadar port is opened to the world. It is a pity that an academic institution, purportedly, has some sort of agenda to start some new narrative on the province.

By: Sabena Siddiqi
Note:  Al-Rasub is not responsible for writer personal opinion.