The Fight for Khalistan 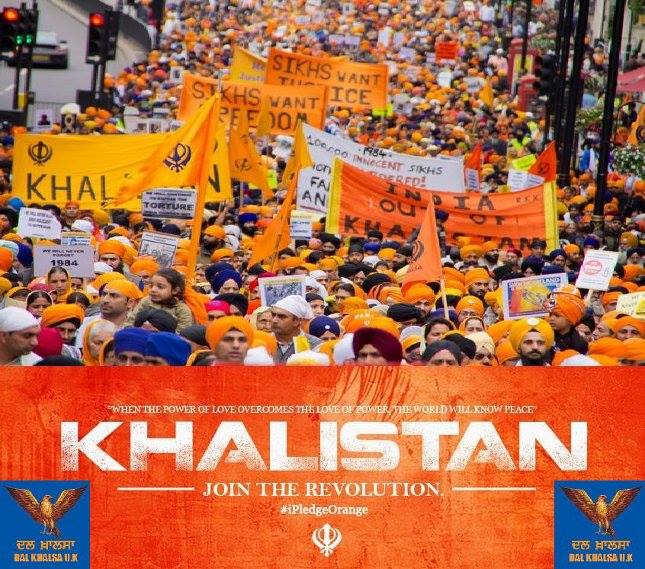 Sikhism originated in the Punjab region, in northwest India, around 500 years ago. Today the Sikhs are less than 2 percent (1.8%) of India’s one billion people. 18 million Sikhs live in the state of Punjab, while the rest have settled in other parts of India, there is a large presence of Sikhs in Southeast Asia, East Africa, the United Kingdom, and North America.
There are more than 27 million Sikhs worldwide, it is the fifth largest religion in the world, the Sikh community has made significant contributions in economic and business fields.

Sikhs have a distinctive culture and identity, they are peace-loving but at the same time a martial race if provoked, they have not been able to get the rights they deserve in India since partition of the subcontinent.

They have been denied space to grow as a community and there is extreme bitterness towards the Indian government which has swindled them from 1947. The Sikhs have been subjected to genocide three times in India, in 1947, June 1984 and November 1984.

The massacre at the time of partition in 1947 was perpetrated and instigated by the Indian government, the overwhelming majority of those killed was Sikh or Muslim. The founder of Pakistan, Jinnah had offered the Sikhs an autonomous sovereign unit, where they would live with honour, instead of living in Nehru,s India.

The Sikh community got misguided by the Hindus and the British and rejected Jinnah,s proposal.  Inevitably, bloody riots happened as soon as the new country Pakistan was announced, migrants started crossing the border and infuriated mobs attacked them, the situation soon got out of control and the death toll was nearly half a million Sikhs and Muslims. Later on, as the dust settled, Sikhs found they were no longer consulted about anything and treated like they were of no consequence, they had completely lost their right of self-determination.

The formation of the Indian republic from a British colony to republic country could not be finished until 894 days after the British left. The unification of India took place under the watch of Sardar Patel, with the help of Nehru and Gandhi he unified india and accumulated different princely states including the Sikh states and dominions such as Patiala.

The fight to create a Sikh sovereign state began soon after as the Sikhs were gradually stripped of their rights, mainly due to policies by Nehru which changed the political systems of the states that decided to join. The Sikhs felt cheated by such policies, not only this but Sikhism was not identified as a separate religion any more, but just as a part of Hinduism. This matter seriously infuriated Sikhs who felt robbed of their faith and identity.

Explanation II to Article 25 of the Constitution of India classifies Sikhs as Hindus.

This was a planned constitutional assault on the independent status of Sikhism and Sikh identity by a so-called secular republic.

The real struggle began in the 70s and 80s decades when Khalistan was first mentioned, on the brink of the 1980s the Khalistanis declared their identity and the start of a separate state with different currency and stamps being released not only in India but in U.S. and UK.

It was Sant Jarnail Bhindranwale who first protested for the abolition of Article 25, but Indian government did not want to solve the issue politically through negotiations.
Conditions in Punjab got very edgy so Bhindranwale and some of his companions started staying at the Golden Temple.

The Indian government went for a military solution rather than dialogue and that was when the seed was sown for a separate state Khalistan. Sant Bhindranwale exhorted the people to be prepared for a long fight and they collected rations and planned fortifications at the Golden Temple.

Then the unspeakable happened, Sikhs were subjected to genocide organised by the government. 1984 is a black year in Indian history, Prime Minister Indira Gandhi ordered military assault on the most important religious shrine for the Sikhs, the Golden Temple in Amritsar.

Operation Blue Star took place on the night of 5-6 June 1984, the army used tanks and artillery. On the 7th Of June the dead body of Sant Jarnail Singh Bhindranwale was located in the basement of the Akal Takht.

It was not less than a holocaust and thousands of Sikhs were massacred. On October 31, 1984, Mrs. Gandhi was assassinated by two of her Sikh bodyguards. The November 1984 Sikh genocide was not an expression of “madness” and popular “grief and anger” at Indira Gandhi’s assassination as the Indian government declares, it uncannily resembles the genocide of Muslims in Gujarat by the then Chief Minister, Narendra Modi. He had also said ” Let the people vent their feelings” and provided government vehicles, fuel and weapons aided by the police and civil administration.

The Golden Temple massacre was orchestrated in exactly the same way as the one in Gujarat, except that the Sikh genocide was on a much more extensive scale. Police commandos were sent to commit the massacre of Sikhs, unruly crowds were brought in from other places and provided Government buses. Sikh people, their houses, temples and businesses were set on fire, police participated in the massacre and watched as Sikhs were burnt alive. Police had taken care to disarm the Sikhs before the mobs  attacked. Even today the people responsible for the genocide roam free and are in powerful positions.

Indian govt records keep count that 3000 Sikhs were killed but the reality was that it looked more like ethnic cleansing, 30 thousand were killed throughout India in the immediate aftermath and over 2,00,000 were displaced, mostly people were burnt alive.

2.5 lakh Sikh youth were killed since 1984, many were tortured, persecuted and tortured.
Many Sikh women were gang raped throughout India by goons, police officers and civil administrators saying it was so that the next generation will be more loyal to the Indian Government.

There was no justice done all these decades, ten commissions failed, now Sikhs have filed a petition in Supreme Court of India demanding countrywide judicial inquiry in the matter of Sikh Genocide of 1984.

Recently, some leaked letters by British government have made it obvious that Britain had advised Indira Gandhi to do a military operation on the Golden Temple to flush out any Khalistan activists hiding there, a SAS officer was drafted in to help the Indian authorities.

The Dal Khalsa is one of the first groups which demanded the creation of Khalistan, it said that Sikhs are shocked by this disclosure. Gurmel Singh the head of the Sikh Council UK, said the attack was “One of the darkest episodes in Sikh history, the letters date from February 1984 yet the attack took place in June 1984 and then there was the subsequent genocide of Sikhs following Indira Gandhi,s assassination in October 1984. I want to know, what else were the UK government saying and doing over all that time.”

“The report has exposed that the attack was not spontaneous. They had been planning it for months.”

Bapu Surat Singh Khalsa is a civil rights and political activist, he has always been very vocal about Sikh rights and has been in the forefront of many political struggles related to Sikhs in Punjab. He has been on hunger strike for the past seven months to put pressure on the Indian government to release Sikh political prisoners languishing in jails way past even a life sentence.

This sort of incarceration violates human rights and right now Bapu,s hunger strike has brought new fervour and emotion to the Sikh freedom struggle. Recently, Bapu Surat Singh’s son-in-law and Bibi Sarvarinder Kaur’s husband Satwinder Singh Bhola was murdered in the U.S. in the month of August by unknown assailants under mysterious circumstances.

The Indian government could be involved in it, ostensibly to break the impetus of the pressure created by Bapu,s hunger strike. Satwinder Singh was very active in organising rallies and protests, he was removed on purpose to create impediments for the Sikh community.

It looks like India is getting edgy as there are plans for Referendum 2020, it is a movement to free the state of Punjab from India and form a country known as Khalistan.
The referendum is planned to take place on June 6th, 2020.

Last year, on the 30th anniversary of the Golden Temple massacre, Sikhs gathered in thousands before the UN headquarters to announce the holding of a referendum for sovereignty among Sikhs in the year 2020. Referendum 2020 among the diaspora was launched by a New York based rights group Sikhs For Justice.

Sikh freedom groups such as Babbar Khalsa International and the Sikh Federation staged protests in Germany in summer this year. The Sikh Federation held a remembrance march and freedom rally in London to commemorate the 31st anniversary of Operation Blue Star.
More than 3,000 people attended the event, some British parliamentarians were also present.

Sikhs have decided to revive their efforts to secure self-determination anew on a much larger scale, this time around a new bonding is developing between the Sikh and Kashmiri freedom movements. Sikh NGOs also filed a complaint with UN for investigation of India’s crimes of June 1984. There have been violations of Article 3 of the Geneva Convention, Article 13 and 16 of the Protocol II for The Protection of Victims of Non International Armed Conflicts committed by India during Operation Blue Star.

The problem with India is that it pretends to be a secular state but it never has been one, it has subjugated all its minorities and lower castes with the intent of establishing Hindu supremacy.

Khalistan is the only objective of the Sikh freedom struggle, they have nothing in common with the Hindu majority in India and demand their sovereignty and right to preserve their identity and religion.

Sikhs have declared that they have the right to self- determination and the right to govern their homeland as a sovereign nation under Charter of the UN and Article 1 of International Covenant on Social and Political Rights.

It is not possible for India to carry on its discrimination much longer, treating Sikhs like second-class citizens, snatching away their right to religion and identity.

“Physical death I do not fear, but death of conscience is a sure death.”
Sant Jarnail Singh Khalsa Bhindranwale

7 Responses to “The Fight for Khalistan”