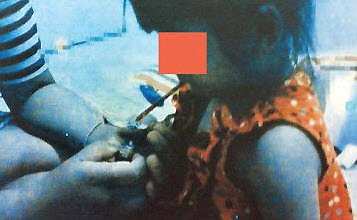 Police are investigating the source of a widely circulated photograph showing a young child being taught how to use drugs by an adult.

The photograph shows a young girl, aged about three, being taught by an adult how to use what is supposedly an illegal drug. It surfaced on Facebook on Oct 4 and had since been widely circulated on internet forums where it has met an angry reaction from netizens.

Many people posted messages on Facebook and popular Thai web board Pantip.com, criticising the adult in the picture.

Some posters questioned whether the adult was actually the child’s parent, while others assumed that the child had been adbucted to be a beggar.

Other netizens said even if the picture was meant to be a joke and the child did not actually take drugs, it was still inappropriate.