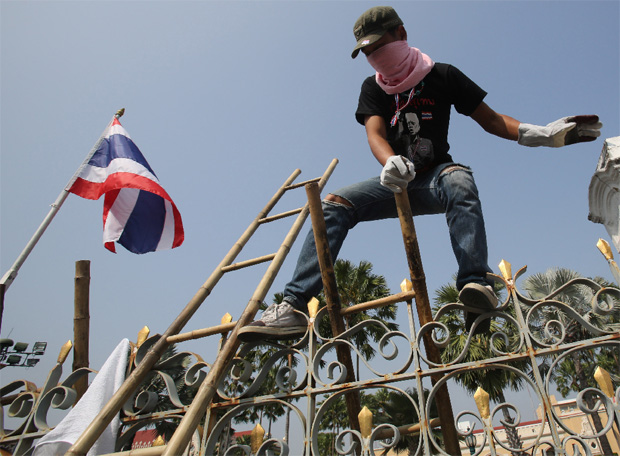 Protesters cut off electricity to the prime minister’s office compound on Thursday and demanded that police abandon the premises, piling fresh pressure on Thailand’s government in a political crisis that has dragged on for weeks.

The protesters, seeking to force the replacement of caretaker Prime Minister Yingluck Shinawatra’s government before Feb. 2 elections, have threatened to force their way in if police don’t leave. Police attempts to negotiate were rebuffed, but they did not withdraw immediately.

An Associated Press photographer inside one of the buildings said electricity had been shut off to the press office. Police confirmed that power had been cut to some buildings in the compound, collectively called Government House.

Yingluck was not in her offices at the time and shortly afterward gave a televised address from an unidentified location in which she announced a meeting Sunday of representatives of all sections of society to try to find a solution to the crisis.

The protest leadership has demanded a meeting with senior military and police officials, a call which has so far been rejected, at least publicly. Protest leaders did meet at a hotel with business leaders in what was billed as an effort to explain their goals.

In a previous confrontation, police withdrew from the prime minister’s compound to allow the demonstrators in without a fight. That withdrawal came after two days of increasingly violent standoffs. Since the latest unrest began last month, five people have died and nearly 300 were injured.

Looking for a way out of the crisis, Yingluck dissolved the lower house of Parliament on Monday and called for early elections. Her foes, however, insist she step aside to make way for an interim appointed government, an action that cannot be taken under the country’s constitution.

They claim that Thai politics are hopelessly corrupt under the influence of Yingluck’s billionaire brother, former Prime Minister Thaksin Shinawatra, who was ousted in a 2006 military coup after being accused of corruption, abuse of power and disrespect for the country’s constitutional monarch.

To carry out reforms, the protesters want to institute a “people’s council” that would appoint a prime minister. see more