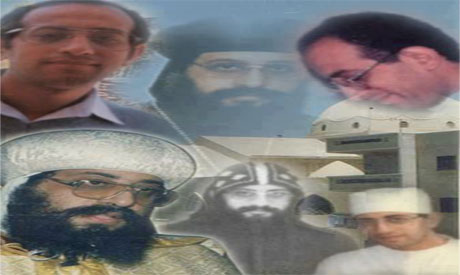 Pope Tawadros II – or Wagih Sobhi Baki Soliman – was born on 4 November, 1952 in the Nile Delta city of Mansoura northeast of Cairo. His father was a landscaping engineer.

The family – his two parents and two sisters – soon moved to the Upper Egyptian city of Sohag, where they stayed until Tawadros completed the third grade. Afterwards, they moved to Damanhur, capital of the Delta’s Beheira governorate.

In Damanhur, he entered a Coptic school, where his religious education began in earnest. Here he was directed largely by the school’s headmistress, who also happened to be the sister of reigning Coptic pope, Cyril VI.

In 1975, Tawadros graduated from Alexandria University’s pharmacy faculty before finding work as a manager at a pharmaceutical factory in Damanhur.

In 1983, he graduated from the Coptic Church’s Clerical College.

Tawadros hails from a religious family: three of his uncles and a cousin were members of the Coptic priesthood. As a child, he spent his summer holidays at the Monastery of St Demiana in Belqas, located in Egypt’s Daqahliya governorate, from which his mother’s family hailed.

He took to monastic life, and in 1986 went to the St Bishoy Monastery in Wadi El-Natrun where he asked to become a monk.

In June 1997, he was ordained general bishop of Beheira and auxiliary to Archbishop Pachomios (who served as acting pope from Shenouda III’s death until Tawadros’ election).

This did not, however, stop him from pursuing his formal education. In 1999, he obtained a joint degree in pharmaceutical engineering, business administration and Christian education from a university in Singapore.

The author of 12 books on Christian theology, Tawadros also played a major role organising the Coptic Church’s annual festival of Saint Mark, observed by Coptic Christians throughout the world.

Tawadros is an ancient Coptic name, similar to the Greek name ‘Theadhuros.’ Popular in Upper Egypt, the name – which literally means ‘Gift of God’ – is often spelt ‘Tadros.’

In the run-up to the just-concluded papal election, Tawadros hailed last year’s Tahrir Square uprising, which culminated in the ouster of longstanding president Hosni Mubarak.

“Tahrir Square brought Egyptians together for the realisation of a sacred objective, which changed Egypt for the better,” he said.

“In the wake of the revolution, we must listen to the young generation’s point of view and hold mature discussions with them,” he added.

“We must concentrate on what will bring Egypt’s children together – not on what will drive them apart,” he said