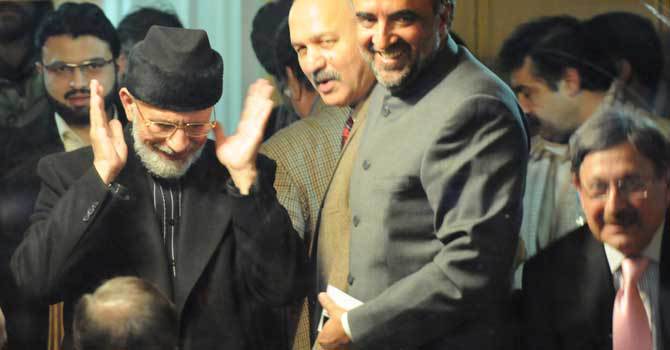 Tehrik-i-Minhajul Quran (TMQ) chief Dr Tahirul Qadri late on Thursday announced an end to four days of anti-government protests by thousands of people after striking a deal with the government.

A high level delegation struck a deal with the cleric after thousands of people largely paralysed the capital and put intense pressure on the government.

The agreement was reached after hours of negotiation inside a bulletproof container the religious leader was using at the demonstration site.

Thousands of protesters packed into the main avenue running through the federal capital, danced and cheered when Qadri announced from the container that he had hammered out an agreement with the government.

“We have reached an agreement. After getting the prime minister’s signature, we will read it in out front of protesters,” the TMQ chief told his supporters.

Tahirul Qadri, who supported a 1999 military coup, has been calling for the military to play a role in the formation of a caretaker administration in the run-up to elections due in May.

The government agreed with the cleric to dissolve the National Assembly before its term ends in mid-March, giving 90 days until elections are held, according to the “Islamabad Long March Declaration”.

That would give time to make sure politicians are eligible to stand for elections.

The government also agreed that the caretaker administration, which normally precedes elections, would be chosen in consultation with all parties.

A declaration laying out the agreement between the government and Qadri was signed by Prime Minister Raja Pervez Ashraf as well as the high-level government officials who made up the negotiating team.

They also agreed that the treasury benches in complete consensus with Qadri’s party will propose the names of two honest and impartial people for the appointment of caretaker prime minister.

On the issue of composition of the Election Commission of Pakistan (ECP), the agreement said that it will be discussed at a meeting on Jan 27 at the Minhaj-ul-Quran Secretariat in Lahore.

It was agreed upon that the focus will be on the enforcement of electoral reforms prior to the polls on article 62, 63 and 218 (3) of the constitution, section 77 to 82 of the representation of people’s act 1976 and other relevant provisions relating to conducting free and fair elections.

The Supreme Court’s judgement of June 8, 2012 on constitutional petition of 2011 must be implemented in true letter and spirit also.

Moreover, they also agreed that with the end of the long march and sit-in, all cases registered against each other shall be withdrawn immediately and there will be no acts of victimisation and vendetta against either party or the participants of the march.

The deal may ease pressure on the ruling Pakistan People’s Party (PPP), which has come under fire for failing to tackle a range of problems, from a Taliban insurgency to a weak economy. – dawn.com