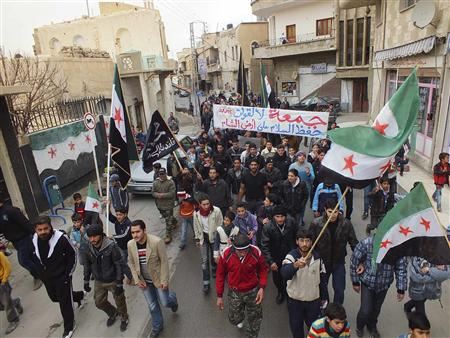 AMMAN (Reuters) – Syrian rebel groups have chosen a former officer to head a new Islamist-dominated command, in a Western-backed effort to put the opposition’s house in order as President Bashar al-Assad’s army takes hits that could usher his downfall.

In Turkey, a newly formed joint command of Syrian rebel groups has chosen Brigadier Selim Idris, one of hundreds of officers who have defected from Assad’s army, as its head, opposition sources said on Saturday.

Idris, whose home province of Homs has been at the forefront of the Sunni Muslim-led uprising, was elected by 30 military and civilian members of the joint military command after talks attended by Western and Arab security officials in the Turkish city of Antalya.

The unified command includes many with ties to the Muslim Brotherhood and to Salafists, who follow a puritanical interpretation of Islam. It excludes the most senior officers who have defected from Assad’s military.

On the Damascus battlefront, Assad’s forces used multiple rocket launchers on Saturday against several suburbs that have fallen to rebels who have fought their way to the edge of the city’s international airport, where foreign carriers have suspended all flights.

Rebels, who have overrun several army bases near Damascus over the last month, appeared to be holding their ground, encircling a main military base in the northeastern suburb of Harasta, known as “idarat al markabat”, near the main highway to Aleppo, according to opposition campaigners.

“The fighters made slight progress today. They captured a weapons depot and got to a tank repair facility in the base, but all 20 tanks inside were inoperational,” said Abu Ghazi, a rebel who was speaking from the area.

“The weather cleared and MiG fighters hit rebel positions around the base. Rocket launchers did not stop for the last three days. The site is crucial for the regime,” he added.

Heavy army bombardment was also reported on the town of Harran al-Awamid near the airport, which is 20 kilometers southeast of Damascus, and on the suburb of Hajar al-Aswad, at the southern entrance of the capital, which has been at the forefront of the Sunni-led revolt against Assad.

Western officials have begun speaking about faster change on the ground in a conflict that is becoming increasingly sectarian and deepening the Shi’ite-Sunni fault lines in the Middle East, a hallmark of politics in the region since the 1979 Iranian revolution.

Like his father, the late President Hafez al-Assad who ruthlessly put down an Islamist challenge, the younger Assad is portraying himself as the only hope for survival of the Alawite minority, an offshoot of Shi’ite Islam that has dominated power in majority Sunni Syria since the 1960s.

Moscow, Assad’s strongest foreign backer, and Washington, which says it supplies only “non-lethal” aid to the rebels, sounded downbeat about the prospects of a diplomatic push to end the conflict after talks this week.

The head of Germany’s foreign intelligence agency said Assad’s government is its final stages and will be unable to survive as more parts of the country slip from his control.

“Armed rebels are coordinating better, which is making their fight against Assad more effective,” Gerhard Schindler told the Frankfurter Allgemeinen Sonntagszeitung newspaper, in an interview made public on Saturday.

“Assad’s regime will not survive. “Evidence is mounting that the regime in Damascus is now in its final phase,” Schindler said

Setbacks for the Alawite-led military, whose core units are stationed in Damascus and on hill tops surrounding the capital, have raised Western concerns that the ruling elite may use chemical weapons to turn the tide of the war.

In a letter to the United Nations Security Council published by official state media, the Syrian foreign ministry said “Syria will not use chemical weapons under any circumstances”.

“We are seriously afraid that some countries that support terrorism would supply chemical weapons to the terrorist armed groups and claim that the Syrian government is the one that is using them,” the letter said.