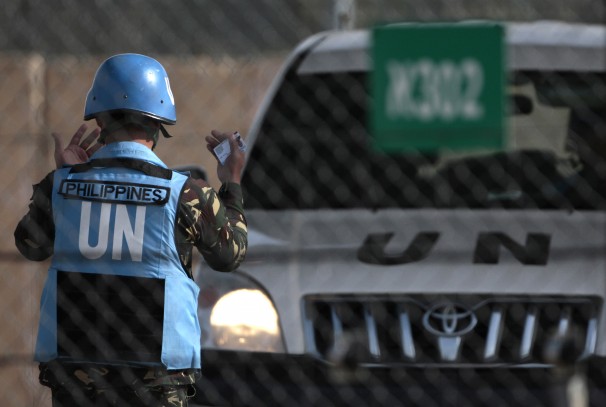 The Syrian government said Thursday it has turned over to the United Nations a Canadian staffer who went missing eight months ago, accusing rebels of having kidnapped him.The man, who the Syrian authorities named as Carl Campeau, went missing in February in the Golan Heights, where a ceasefire line runs between Israel and Syria.”The ministry of foreign affairs turned over the Canadian Carl Campeau, an employee of the UN Disengagement Force (UNDOF) who was kidnapped by terrorists in February… to the UN representative in Syria,” state television said.The Syrian foreign ministry said Campeau had been kidnapped in Khan al-Shih in Damascus province.In February, Israeli media reported that Campeau was a lawyer working for UNDOF, which patrols the Israel-Syria ceasefire line.

The United Nations said one of its UNDOF employees had gone missing between Israel and Syria, without specifying whether he was a peacekeeper or a civilian worker.The UN has complained to the Syrian government about spillover from the country’s civil war into the zone where more than 1,000 peacekeeping troops from Fiji, India, Ireland, Nepal and the Philippines are operating.The UN force was established in 1974 to monitor a withdrawal by Israeli and Syrian forces from the zone.

Israel captured the Golan Heights from Syria in 1967 and later annexed it in a move not recognised internationally.Syria has long demanded the return of the entire strategic plateau as a condition for any future peace agreement with the Jewish state.