Spokesman: Morsi has fewer security guards than any other Egyptian president 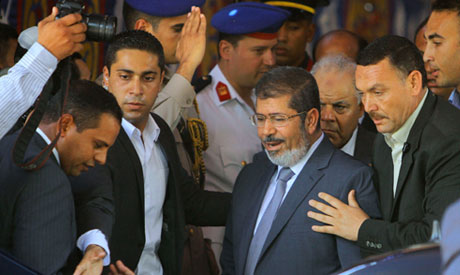 The president’s spokesman Yasser Ali defended Morsi’s travels around Egypt with a security detail.
The Egyptian president’s official spokesman has rejected reports that President Mohamed Morsi spends extravagantly on security forces during his trips around Egypt.

In a statement released on his Facebook page, spokesman Yasser Ali said that during Morsi’s visit to the governorate of Assiut last week, he was accompanied by only 600 security personnel, “which is the lowest number of forces to be used to protect an Egyptian president.”

The rest of the personnel used, according to Ali, were traffic policemen from Assiut who were directing traffic in order to ensure that Morsi’s visit was on schedule.

Ali also added that Morsi, who has been visiting various Egyptian governorates during the past few weeks, usually travels on Friday, which is the official weekend in Egypt, so as not to disturb public interest.

Ali also criticised the Egyptian media which has been circulating reports that Morsi has spent excessively for an entourage which travels with him on these trips, with some reports claiming that the trips cost anything from millions to over a billion.

Since his inauguration as the first civilian president after a popular revolt that removed former president Hosni Mubarak, the Islamist president has been in the habit of visiting a different governorate each Friday to perform prayers there and meet local citizens.