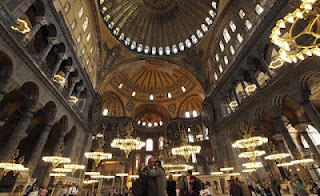 Thousands of devout Muslims prayed outside Turkey’s historic Hagia Sophia museum on Saturday to protest a 1934 law that bars religious services at the former church and mosque. Worshippers shouted, “Break the chains, let Hagia Sophia Mosque open,” and “God is great” before kneeling in prayer as tourists looked on. Turkey’s secular laws prevent Muslims and Christians from formal worship within the 6th-century monument, the world’s greatest cathedral for almost a millennium before invading Ottomans converted it into a mosque in the 15th century.

“Keeping Hagia Sophia Mosque closed is an insult to our mostly Muslim population of 75 million. It symbolizes our ill-treatment by the West,” Salih Turhan, head of the Anatolian Youth Association, which organized the event, told the crowd, whose male and female worshippers prayed separately according to Islamic custom. The government has rejected requests from both Christians and Muslims to hold formal prayers at the site, historically and spiritually significant to adherents of both religions. The rally’s size and location signals more tolerance for religious expression under Prime Minister Tayyip Erdogan, whose party traces its roots to a banned Islamist movement.His government has also allowed Christian worship at sites that were off-limits for decades, as it seeks to bring human rights in line with the European Union, which it aims to join. Turhan told Reuters his group staged the prayers ahead of celebrations next week marking the 559th anniversary of the Ottoman Sultan Mehmet’s conquest of Byzantine Constantinople. “As the grandchildren of Mehmet the Conqueror, seeking the re-opening Hagia Sophia as a mosque is our legitimate right,” Turhan said in an interview.

Worshippers refrained from entering the museum, one of Turkey’s most-visited tourist destinations and whose famous dome is considered a triumph of Byzantine architecture. Most Turks appear satisfied with it remaining a museum as a kind of compromise between its conflicting historic roles.