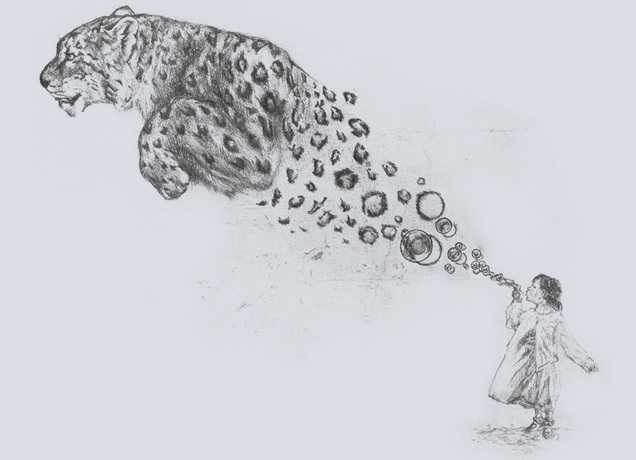 Snow leopards have remarkable facial features like round, short ears reduce heat loss and a wide, short nasal cavity heats the chilled air. A snow leopard’s extra large paws help keep the cat from sinking into the snow. Snow leopards have short front limbs and long hind limbs that are used to launch the cat up to 30 feet in a single leap!  A long, thick tail helps the snow leopard keep its balance and acts as a scarf to help warm the cat’s body during the night. A snow leopard’s fur pattern is white, yellowish and smoky grey speckled with dark-grey to black spots and rosettes.

Snow leopards primarily like to hunt wild sheep and goats. However, the three most important goat species that the big cats prey on are blue sheep, the Asiatic ibex, a large wild goat, and the argali, another wild sheep species. Snow leopards eat slowly, usually taking 3 or 4 days to consume a prey animal.

Snow leopards are shy, elusive cats known for their solitary nature. Because of this, it can be challenging for scientists to identify patterns of snow leopard behavior. Snow leopards make sounds similar to those made by other large cats, including a purr, mew, hiss, growl, moan, and yowl. However, snow leopards cannot roar due to the physiology of their throat, and instead make a non-aggressive puffing sound called a ‘chuff’.

Mating season for wild snow leopards is between January and mid-March. The female carries the cubs for 93-110 days before her litter is born in June or July. Usually 2 or 3 cubs are born at a time, and the diligent mother provides food and shelter for her young. This can be a challenge for even the most experienced snow leopard mother, especially during the lean winter months.

Cubs when born are small and helpless and do not open their eyes until they are about 7 days old. At 3 months old, they begin following their mother and start to learn important behavior like hunting. At 18-22 months old, cubs become independent of their mothers.

Poaching, Snow leopards are known for their beautiful fur, which are highly valued in Central Asia, Eastern Europe, and Russian for garment making. Their bones and other body parts are in demand for use in traditional Asian medicine and wild snow leopards are sometimes captured for private animal collections in Central Asia.  There is always an incentive to increase the size of a herd in villages, which leads to overgrazing. This activity reduces the amount of food available to the wild sheep and goats that snow leopards typically eat thus reducing their numbers. Similarly, governments in snow leopard habitat areas are focused on economic development and environmental policy is not often pursued.  Enforcing the laws that protect snow leopards come with high cost, and it is difficult to catch poachers in the remote and rugged habitat where snow leopards live.

How to preserve these national and endangered treasures?

So the way to enable snow leopards to survive is not to create protected areas that sequester them from local communities. That solution often alienates farmers, who lose their grazing areas as a result. Researchers and conversationalists suggest supporting local herders instead so they can make a living despite snow leopard raids.

And that’s exactly what he’s been doing for more than a decade. In 1999, The Snow Leopard Project was founded, an insurance scheme that compensates local people in snow leopard-range countries if their livestock are killed by the predators. Various branches of the successful project, which is jointly managed by project officials and a committee of villagers. Meanwhile, the snow leopard population seems to have remained stable, if not grown.

Local people—at least in Pakistan, Afghanistan and other countries which are filled with snow leopard population—do not have hostility to snow leopards, [nor] this itch to kill it. If they get compensated for their losses, they have no interest in eliminating this animal.

Since snow leopards have never been known to attack people, researchers are confident that the Snow leopard Project scheme would work far better than a conservation policy that separates the leopards from the locals: The idea of co-existing with snow leopards is easy to implement if you satisfy the villagers. Ultimately, conservationists share the same goal: Ensuring that the snow leopard—“symbol of the high mountains“—can survive. Whether that will continue to be an animal dependent on people for food, though, is still up in the air.