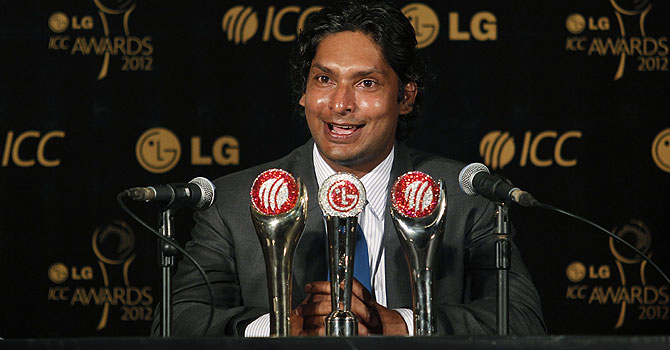 Performances over a 12-month period that ended on August 6, 2012 were taken into account.

Sangakkara scored 1,444 runs with five centuries in 14 Tests and 1,457 runs in 37 one-day internationals with three hundreds during the year.

The Sri Lankan fought off stiff competition from South Africans Hashim Amla and Vernon Philander, and Australian Michael Clarke, to win the trophy.

“This is an amazing honour and I’ve seen the people who have won it before me and the nominees too… to be named alongside them is wonderful,” said Sangakkara.

“I admire them greatly and even more so when I looked up at their records on the screen this evening. It’s great to be amongst them, but now, to receive this honour this evening, is simply fantastic.”

Virat Kohli of India was named the One-day Cricketer of the Year for scoring 1,733 runs in 31 matches with eight centuries.

“I think I have tried to keep things as simple as possible and it’s worked for me on the field,” said Kohli.

“This year has been a learning curve along the way from the seniors in the team. It’s been an all-round effort and I’m very happy to have won this award.”

West Indies spinner Sunil Narine, 24, won the Emerging Cricketer of the Year award for taking 12 wickets in three Tests and 28 in 15 one-day internationals.

“This award means a lot for me and it’s an encouragement to keep going and continue to improve. I dedicate this award to my father,” said Narine.

“It’s good to be setting high standards and hopefully I will keep performing well for Ireland in the future,” said Dockrell, 20.

Source: Dawn.com and Times of India