Park received 48.8 percent of support in a mock multi-way race, compared to Moon’s 44 percent. To a question on who they would support if Ahn avidly supported Moon, 48.2 percent still chose Park, while 46.6 percent supported Moon.

The survey was conducted by Realmeter on Dec. 4 on 1,000 respondents through random digit dialing. The survey has a 95 percent confidence interval of ±3.1 percentage points.

Ahn on Monday disbanded his campaign team after his withdrawal from the presidential race on Nov. 23, vowing to continue his journey for new politics, and briefly urging his followers to support Moon. Since then, external organizations in support of Ahn announced their support behind Moon with speculations that Ahn himself would start to prop up the opposition flag-bearer’s campaign. 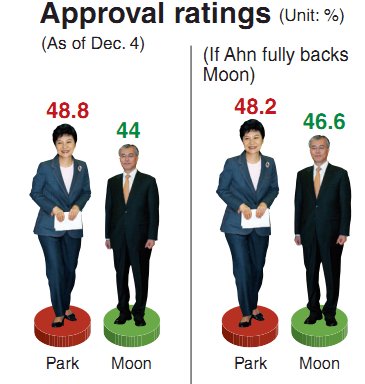 The respondents were split on whether Ahn’s remarks on Monday clarified his support for Moon, with 44.6 percent saying that it was not a show of support, and 41.1 percent saying it was.

Of the respondents who had supported Ahn, 27.2 percent said they now support Park, a 1.6 percentage point decrease from a week before.

More voters appeared to have made up their mind as only 13 percent answered they may change their minds, which was a 3-4 percentage point decline from a week before.

Park’s ratings, which had hovered between 40 and 45 percent last month, have been consistently higher since Ahn’s withdrawal, such as to 49.7 percent in a regular survey by Realmeter on Dec. 2-3.

Of the respondents who described themselves as conservative, 84.3 percent said they supported Park, with 4.9 percent of them saying they could change their mind.

Among the progressives, 70.9 percent were in support of Moon, with 12.3 percent saying they could change their mind.

Things were not all rosy for Park, however, as she was also seen to be losing more moderate voters, with the ration of “moderate” respondents supporting Park dropping to 37.1 percent from 43.7 percent on Nov. 27.

Moon, meanwhile, enjoyed a surge in popularity in some of the key battlegrounds, including Jeolla Province, the traditional political stronghold of the DUP, and the PK region encompassing Busan and South Gyeongsang Province.

The number of respondents who said Moon could win the election also surged to 38.8 percent, up 1.1 percentage point from a week before.