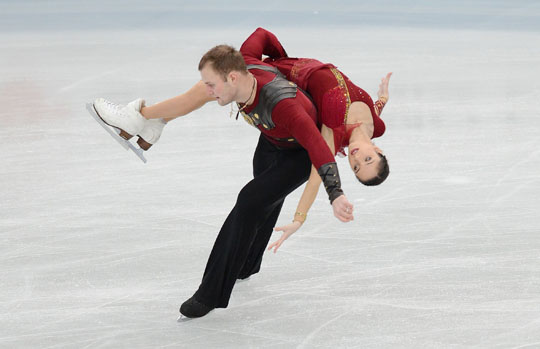 RIFU, Miyagi Pref. — Russia’s Vera Bazarova and Yuri Larionov won the pairs with a steady performance in the free skate on Sunday at the NHK Trophy.

The victory gave the Russians, who led after Saturday’s short program, a spot in next month’s Grand Prix Final back home in Sochi. They skated to “Spartacus” and exhibited some excellent throw moves to triumph by more than 11 points with a score of 192.02.

Canada’s Kirsten Moore-Towers and Dylan Moscovitch took second with 180.63, which was good enough to also give them a berth in the GP Final, where the top six skaters/teams in each of the four disciplines will face off.

The Canadians performed to “Queen Medley” and were marked down when Moore-Towers fell on their throw triple salchow.

“We’re very happy to win,” said Bazarova. “This is the first time for us to win a GP event at the senior level. There were a few mistakes with our jumps and that is something we have to work on. We are also happy to qualify for the GP Final in Russia.”

With the 2014 Sochi Olympics just 15 months away, Bazarova said the stakes are rising for athletes hoping to make the team from the host nation.

“The level of figure skating is improving in Russia,” she commented. “We have many new skaters in pairs, especially before the Olympics. It is very competitive right now, which is good.”

“We are happy to win the medal,” stated Moscovitch. “Our skate wasn’t ideal. We could have been better, but we are happy to go the GP Final. The fans here today were incredible, the love they have for the sport is remarkable.”

In other news, Daisuke Murakami underwent surgery on his dislocated right shoulder on Saturday at a Miyagi hospital. Murakami hurt the shoulder in practice on Thursday, before reinjuring it again on Friday during the men’s short program and being forced to withdraw.

Meanwhile, The Japan Times has learned that the 2013 Grand Prix Final, the last international competition before the 2014 Sochi Games, will be held in Fukuoka next Dec. 5-8.