by Newsmaster
in World
0

A BRITISH man hoping to walk around the globe has been stopped in his tracks more than 32,000km in, after Russia denied him entry.

Everything he owned was stashed in a makeshift trolley he named “The Beast” and he had just $300 in his pocket. 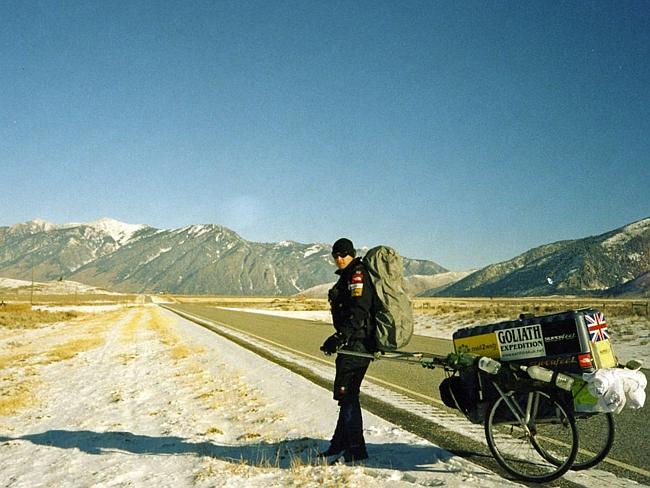 The British hiker on a Canadian road with all his possessions in a trolley. Picture: Karl Bushby/Caters News Source: Picture Media

But upon reaching Russia 13 years later, he was told he was not allowed to cross the border.

He then changed course, traversing the length of South and North America, completing the first recorded crossing of the Bering Strait on foot and travelling two thousand miles into Siberia.

Now 15 years into his trip, he is determined to complete the challenge he set himself.

Mr Bushby, 45, is now walking from Los Angeles, California, to Washington, DC, where he plans to visit the Russian embassy and convince them to grant him entry into their country.

The walk from LA to Washington alone is more than 5600km long.

“There are two rules for the expedition,” Mr Bushby says on his website. “Firstly I can’t use any form of transport to advance. Secondly, I can’t go home until I arrive on foot.”

At first, few people thought he could accomplish his goal. “It’s something the world told me I could not do, and which I knew I could do,” he said.

He has endured blistering heat and bone-chilling cold, crossed mountains, deserts and jungles, been robbed and detained, evaded armed rebels, been swept out to sea on ice, nearly starved in the rainforest and overcome dozens of other harrowing obstacles.

He says the support and encouragement of people along the way inspires him to keep going.

“In all my travels I’ve found that 99.99 per cent of people are good and decent, and want to see me succeed. I hope that by fulfilling my dream I’ll inspire others to pursue theirs.”… see more

Hunter Dies After Deer He Shot Gets Back Up and Attacks

Thieves Make Off With $1.25M Toilet