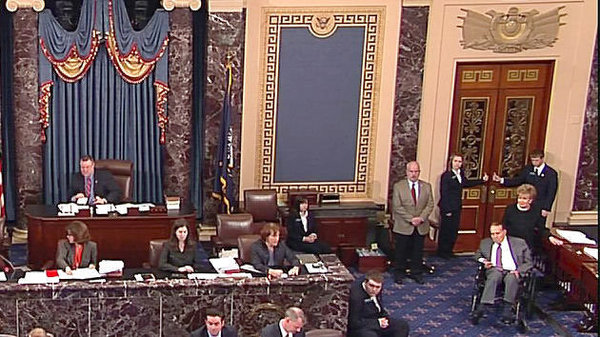 Washington – It seems hard to believe that a United Nations treaty that calls for those with disabilities to be treated equally could be something the US Senate would be against, but the unimaginable became a reality on Tuesday.
On September 7, 1989, the U.S. Senate voted overwhelming to approve S.933 – Americans with Disabilities Act. The measure passed with a vote of 76 in favor and 8 against.

On July 26, 1990, President George Bush signed the Americans with Disabilities Act (ADA), proudly declaring it the first comprehensive declaration of equality for people with disabilities anywhere in the world. Referring to the Declaration of Independence, he said:

“Today’s legislation brings us closer to that day when no Americans will ever again be deprived of their basic guarantees of life, liberty, and the pursuit of happiness.”

The United Nations General Assembly adopted the Convention on the Rights of Persons with Disabilities and the Optional Protocol on March, 21, 2012. The treaty, which is modeled on the American Disabilities Act, establishes a committee with the authority to issue non-binding recommendations to countries regarding the treatment of disabled persons. The treaty did not have authority to change any laws within the United States, or take any action in the United States. The treaty simply gave the U.N. the power to give recommendations to governments. Being based on current U.S. law, it would have been extremely unlikely the U.N. would have found a need to make any such recommendations to the U.S. government.

On July 12th of this year, former Republican Attorney General Dick Thornburgh testified before the Senate Foreign Relations Committee, saying U.S. sovereignty would be protected under the treaty and pointed out that is was merely a non-discrimination instrument at the U.N.’s disposal, similar to the ADA.

“{The treaty} would take a step toward making it easier for disabled Americans to live and work overseas, without impinging on U.S. sovereignty or Congress’ authority to determine our disability laws. Veterans service groups are especially supportive of the treaty, which would help level the playing field for disabled veterans who are abroad.”

On Tuesday, December 4, 2012, the U.S. Senate was set to vote to ratify the measure, joining the other 155 nations around the who world had already signed and approved the treaty. Former Republican Senator Bob Dole visited the Senate floor, sitting in his wheelchair and urging lawmakers from both parties to pass the measure. Prior to the vote, as Senator Dole was leaving the Senate floor, Democratic Senator John Kerry told his fellow Senators ““Don’t let Senator Bob Dole down.”

When the vote concluded, the Senate voted 61 to 38 to ratify the Convention on the Rights of Persons With Disabilities. However, the number was short of the two-thirds needed to sign on to an international treaty. Every member of the Senate that voted against the treaty was a Republican.

Senator Rick Santorum, who has a disabled child, was one of the Republican who voted against the measure, said:

“The reason I have so strongly opposed CRPD is also simple. Karen and I have experienced first-hand as we care for our little blessing, Bella, that parents and caregivers care most deeply and are best equipped to care for the disabled. Not international bureaucrats.”

“With these provisions, the United States can join the convention as an expression — an expression — of our leadership on disability rights without ceding any of our ability to decide for ourselves how best to address those issue in our law.”

“This is one of the saddest days I’ve seen in almost 28 years in the Senate, and it needs to be a wake-up call about a broken institution that’s letting down the American people.”

People around the U.S. have expressed outrage over the defeat of the treaty. Comments on message boards, Facebook and Twitter are harshly critical of Republicans, with many wondering how anyone could vote against equality for those living with disabilities. An LA Times poll shows that 83 percent of Americans polled disagree with the Senate vote.

Digital Journal spoke with three individuals who have been following the issue closely, asking their opinion of the Senate vote. Kim Tutt, who is a disabled person with Cerebral Palsy and a member of the Mayor’s Council of Citizens with Disabilities in Memphis, TN said:

“This is sad. It shows a lack of education and understanding on the part of the politicians. It affects travelers, and children who need to be able to get an education in order to survive. By defeating this treaty, it is clear they are not advocates for those with disabilities, not now, not ever.”

“I feel betrayed by politicians who I have voted for and trusted over the years. I am especially frustrated by politicians like Kay Bailey Hutchinson(TX) and Lamar Alexander (TN) who have served the rights of the citizens in the past but chose to serve party politics on such an important issue. My family has had to rely on IDEA and ADA on many occasions to get my child the same services that people without disabilities take for granted.

Sadly, children with disabilities around the world are not lucky enough to have these rights protected by their government. The United Nations treaty was asking countries to agree to treat their citizens with disabilities with equality. The US has led the world in this area for the past 20 years, but now, we are one of the few countries who has not signed because of the arrogance and bully mentality of members of the Senate. Every one of the Senators who voted against this bill should be ashamed. They have hit an all time low in my book and I will not forget.”

Sherri Lingerfelt, a special education teacher, wondered why Senators would be against a treaty that is non-binding. Even with the current ADA laws in place in the United States, she feels the UN treaty may have helped to give suggestions on ways to strengthen or improve the current ADA laws, saying:

“I still witness the disabled having to fight for rights, and much needed services. Family members struggle to get the support they need to care for a disabled loved one. I have witnessed the Association of Retarded Citizens having to file suit more than once during my career because their basic funding has been cut, which dramatically impacts those individuals who are barely surviving in group homes as it is.”

Senate Majority Leader Harry Reid, a Democrat, has vowed to bring the measure up for another vote next year. Between the public outcry, and constituents such as those that spoke to Digital Journal, perhaps the politicians will become as informed about the treaty as the American people appear to be. Then maybe they will vote to approve the measure in 2013.