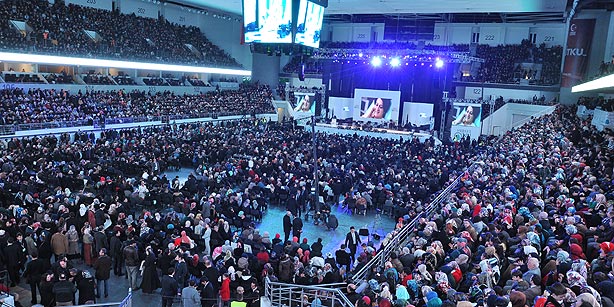 Attended by more than 20,000 people, a nationwide reading contest entitled “Everybody reads about him,” was launched with an event in Ankara late Thursday as part of a campaign to help the Turkish public acquire a broader knowledge of the life of Prophet Muhammad.

The event brought together thousands of people. The campaign was first announced by Peygamber Yolu (The Prophet’s Path Association) in a press conference held at İstanbul Congress Center (ICC) in early January.

Representatives of Peygamber Yolu stated in their press release that the team came up with the idea while they sought for an answer to the question, “what should we do to better know and understand Prophet Muhammad?”

According to Ali Demirel, chairman of Peygamber Yolu, contemporary people are desperately in need of the peace that was widespread when the Prophet Muhammad lived. Demirel said that 40 academics, including himself, established the association with the aim of reviving this peaceful environment.

The website of the association (www.peygamberyolu.com) was set up to provide an accurate guide to the life of the Prophet, Demirel said.

With the “Everybody reads about him” campaign, the association aims to tell the public about Prophet Muhammad’s life, his moral values, his pacifist nature, what he achieved and what he went through during his efforts to promote Islam.