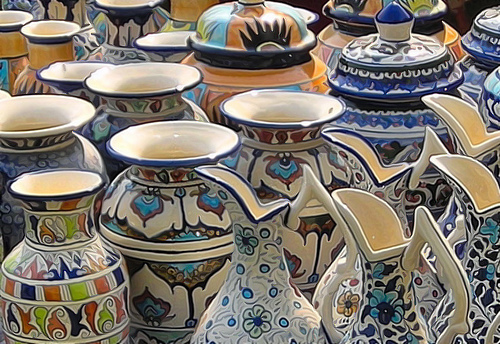 Pakistan is rich in cultural diversity and trends. Whether it is language, food, dress code, arts and crafts, food and local heritage. Almost every trend and piece of art is radiating its elegance that upholds traditions and conventions.

When it comes to art and crafts, pottery stands out as a uniquely appealing art. Pottery is also called ceramic art, making objects ranging from small decorative pots to huge vessels and vases. Clay which is the main ingredient is incredible in its abilities thus gets molded by the hands into objects of beauty worth seeing. While preparing clay kneading and wedging technique is applied. A pug mill can be used for this process ensuring all the small particles are fused and evenly aligned otherwise the clay gets deformed while running on a wheel. A pottery wheel is a device that spins at various speed levels depending upon the object that has to be created. Some amount of clay dough is put on the wheel’s head then it’s spun and shaped via the help of hands and some tools. Finally, when a pot is formed it is cut off from the wheel to dry and then put in fire at high temperature to give it rigidity and strength.

Since the pottery craft is at a massive level it includes various forms and types such as stoneware porcelain, and earthenware.

is the densest type of pottery because it requires a high temperature around 1100 to 1300 degrees Celsius. Typically a stoneware is coated with powdered glass then heated again at high temperature thus allowing the glass powder to get infused with clay creating an impermeable vitreous shiny surface.

is the ancient type of pottery it’s simple to make because it is the softest among the three types and requires low temperatures ranging from 1000 to 1200 degrees Celsius. Porcelain is the finest of all its unique feature is that when placed in light gives a translucent effect and when tapped gives an audible ringing tone.

Pottery in Different Cities of Pakistan:

In Pakistan, pottery is very famous in the province of Sindh. There is a village called Hala, home of ancient artisans called ‘Kashigars’ popular for making pots and tiles of various shapes, earthenware and glazed ceramics. The Hala pottery is not only liked in Pakistan but also exported to Europe and Middle East. As far as decoration is concerned the kashigars paint the pottery with the dynamic signature colors that are brown, white, mustard, turquoise, cobalt blue and purple. Generation after generation the culture of pottery making is infused in the blood of Hala people. Different pieces of art work is generated including various patterns like flowers, geometric shapes and calligraphy.

Apart from Sindh, Multan the historically rich civilization located in province of Punjab is popular in blue pottery. This delicacy has historical background link with Persian and Turkish cultures. The blue pottery depicting the art of blue painting on ceramic pots is one of the mesmerizing art of the craftsmen. The influence of this art is an origin from central Asia, Mongolian and Persian craft trends. Painting hedging branches, leaves of trees and the magnificent richness of blue color indicates the roots of its origin. All the painting done on the objects are purely by hand thus giving it a classic appealing center of attention among the other decorative items.

According to various researches blue pottery in Multan is done with two different forms first one is with ceramic and the second is terracotta. Red clay pottery is called terracotta. The red color is natural and red clay originates from rivers of Multan and its canals. For ceramic pottery the clay and stone is taken from various cities of Pakistan like Mahansehra, Tharparker, Peshawar and Swat. The blue pottery is not only use for decorative purposes but also domestically like kitchen accessories drawing rooms accessories and much more you name it.

Pottery itself is tempted an exclusive and indigenous in style. Apart from domestic use the blue and white tiles painted uniquely by the potters are use in decoration of buildings as well. An average estimate shows that there are more than twenty stages before the pots and tiles develops into majestic piece of art.

In culturally rich civilization of Rawalpindi that shows the remains of Mohenjo-Daro and Harappa, the artesian trend of pottery and craftsmanship is deeply rooted. In this city there’s a place called  Gawalmundi has ‘kumharon ki gali’ is famous for pottery. Here pottery can be seen in its very traditional forms. Ranging from small pots to ‘clay huqqa’ is very famous. This art is descending from their forefathers. But unfortunately trend of pottery is fading now. From a full-fledged crowded street, kumharo ki gali has reduced to few shops, the saviors of this trend.

No doubt that the pottery items last longer and are more durable and economical as well. Also, when something is formed by hands of artisans, it becomes millenniums later. As the civilization has grown people have relied and took the advantage of improving their well beings and way of life. From the potters  perspective, people have the same need of pottery they’ve always had. So this trend will last long and stretch along with the growing human civilization.

Some Ideas to Have:

Take some good ideas of decorating the pots in your space. You can arrange them symmetrically like in sizes, shapes and colors. Also the pots can be used for kitchen gardening promoting the organic style. You can incorporate the pots in home decor with variety of ornamental plants giving a rustic farmhouse look or modern midcentury look.

So whenever you catch a chance must visit to these places to have an insight of the real art and grab some pieces you want.