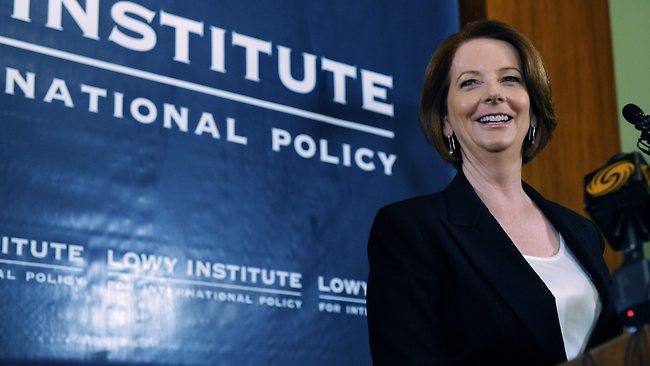 ASIA’S rise is unstoppable and gathering pace and Australia must have a plan to capitalise on it, Prime Minister Julia Gillard says.

“This is not only unstoppable, it is gathering pace,” she said in a speech to the Lowy Institute think tank in Sydney.

Asia will be home to most of the world’s middle class by as early as 2025, she said.

“This is good news for Australia and it should drive a profound change in our thinking about our economic relationship with Asia,” Ms Gillard said.

But the opportunity posed by this middle-class boom would not “fall into our laps”.

“The world will still be a competitive one where we must make our own living and our own way,” the Prime Minister said.

“But with the right plan, we can make the new middle-class Asia a new market for a high-wage, high-skill Australia.”

Ms Gillard underlined the paper’s prediction that average wages could rise by $11,000 to $73,000 by 2025.
“Despite the strengths our people have built and the confidence they have earned, too often our public debate is marked by an economic cringe,” Ms Gillard said.

“I am determined that we will be a nation self-confident enough to feel our strengths and wise enough to know we must build on them.”

The Federal Government has centred its strategy paper around a promise that wages won’t fall because domestic skills will rise to feed the region’s appetite for products outside of raw commodities.

“Think of it this way: back in the ’80s Foster’s beer tried to get into China. Today it is Grange carrying the flag,” the prime minister said.

“For the first time in our history, Asia is not a threat to our high-skill, high-wage road. It is a reason to stay on it.”

Ms Gillard outlined the nation’s objectives for 2025 and the pathways across five key action areas.

These include boosting Australia’s economic strength, building its capabilities and knowledge of Asia, better integration with Asian markets, building security in the region and deeper relationships with the region’s most important countries.

All Australian schools will engage with at least one school in Asia to support the teaching of a priority Asian language: Mandarin, Hindi, Indonesian or Japanese, Ms Gillard said.

The government will provide 12,000 Australia Awards to Asian nations over the next five years to promote people-to-people links between Australia and the region.
It will support business missions through an Asian century business engagement plan led by Trade Minister Craig Emerson.

Australia will make it easier for low-risk people to visit and encourage more tourists from China and other key Asian markets.

“These are important, immediate steps for government,” Ms Gillard said.

“They are the beginning for our long-term national plan.”

Ms Gillard described the white paper as a “plan for national success” that will involve governments at all levels, business, unions and the broader community.

“We can only win in this century if every sector of our economy is dynamic, productive, engaged,” she said.

Plans but no money for new Asian missions

THE Federal Government has outlined plans to open more diplomatic missions in Asia but is not saying when this might happen.

The government’s long-awaited Asian Century white paper, released today, acknowledges that Australia will need to boost its diplomatic “footprint” in Asia to fully capitalise on the region’s rapid rise.

It outlines plans to open a full embassy in the Mongolian capital Ulaanbaatar, and consulates in China’s Shenyang, Thailand’s Phuket and in Indonesia’s east.
Australia will also develop “comprehensive country strategies” for the five Asian nations listed as the most important – China, India, Indonesia, Japan and South Korea.

“These strategies will set out the objectives and priorities for relationships across the whole community with each country,” the paper says.

It also says Australia will appoint a Jakarta-based ambassador to ASEAN to support better engagement with its 10 South-East Asian member nations.

It also calls for stronger ties between state and territory governments and their counterparts in the region, including through more sister-city and sister-state relationships.But it does not offer any funding or timeline for the plan, saying only the missions should be opened when “circumstances allow”.

“Over time, we will continue to review our diplomatic representation in Asia to reflect new priorities, both in capital and regional cities,” the paper says.

Asia to be core part of school education

ASIAN studies will become a core part of Australia’s school curriculum under the federal government’s ambitious Asian Century white paper to capitalise on the region’s growing wealth and influence.

The document reveals a number of targets for the nation over the 13 years to 2025, aimed at ensuring Australia fulfils its ambitions and competes effectively within Asia.

By 2025 Australia’s gross domestic product (GDP) per person will be in the world’s top 10, up from 13th last year.

The school system will be in the top five in the world, and 10 of its universities in the world’s top 100.
The paper places a heavy emphasis on education, saying Asian studies will become a core part of the Australian school curriculum.

All students will be able to study an Asian language and the priorities will be Chinese Mandarin, Hindi, Indonesian and Japanese.

Australia’s leaders will also be more Asia literate, with one-third of board members of the top 200 publicly listed companies and commonwealth bodies to have “deep experience” in and knowledge of Asia.

The Australian economy will be more deeply integrated with Asia, with Asian trade links to be at least one third of GDP, up from one quarter today.Prime Minister Julia Gillard says the document lays out an ambitious plan to make sure Australia grows stronger by capitalising on the opportunities offered by the Asian Century.

“The scale and pace of Asia’s rise is staggering, and there are significant opportunities and challenges for all Australians,” she said in a statement today.

“It is not enough to rely on luck.

“Our future will be determined by the choices we make and how we engage with the region we live in. We must build on our strengths and take active steps to shape our future.”
Australia should be in the top five countries for ease of doing business by 2025, the white paper says.

Its diplomatic network should have a larger footprint across the region.

While the white paper sets out what actions governments can take, it also calls on businesses and communities to play their part.

New work and holiday agreements between Australia and its Asian neighbours will mean more opportunities for work and study in the region and to take up professional opportunities.

The government will enter into a National Productivity Compact with the states and territories, focused on regulatory and competition reform.

“We want to ensure that Australia is as competitive as it can be,” Finance Minister Penny Wong said in a statement.

The compact is expected to be agreed at the next meeting of the Business Advisory Forum between business leaders, prime minister and senior ministers.

The white paper also reinforces the need to attract skilled migrants and students from Asia.
The government is expanding its network to support online visa lodgment, multiple entry visas and longer visa validity periods and is streaming the student visa process.

Seven of the top 10 source countries in Australia’s migration program are in the Asian region, including India, China, the Philippines, Sri Lanka, Malaysia, South Korea and Vietnam.

Students from Asia already account for about 77 per cent of the more than 550,000 international enrolments each year.

It proposes setting up a series of grass roots programs, plans and policies and increasing exporter access to Asian markets.

This will help drive the development of regional and remote areas, especially in Northern Australia and Tasmania.
Australia could be left behind, warns Abbott

THE federal Coalition has broadly welcomed the thrust of the Asian Century white paper but says it lacks funding and specific detail.

Opposition Leader Tony Abbott was responding to the government’s release of the document setting national goals to 2025 to improve productivity, skills, education and Asian language learning and cultural ties.

“What it contains is commonsense but predictable.

“It’s full of laudable goals but not very many specific initiatives and certainly no commitment of money.”

Mr Abbott said the government was scrambling to overcome “serious failures” in its relationships with Asia, such as its earlier ban on live cattle exports to Indonesia.

“The government is playing catch-up politics with its new commitment to Asian languages and its ‘Australia Awards’,” he said.

Mr Abbott said Labor was strong on aspiration but weak on delivery of its policies.He described the white paper as “one of a piece” with a government that was more talk than action.

“I think we take Asia more seriously than this government and I have said repeatedly that we need more Jakarta and less Geneva in our foreign policy,” he said.

He also said the paper’s goals on education and innovation were in contrast to cuts to university research in the mid-year budget review released last week.

The best way Australia could take part in the Asian growth story was by keeping its economy strong.

“My fear is unless the government can do more to boost our domestic activity economy, inevitably we are going to be left behind,” Mr Abbott said.

“The Australian moment in the Asian century could easily pass.”

Ms Bishop said the paper contains some worthwhile goals but it’s lacking the funding to back it up, along with detailed steps for achieving some of those goals.

Ms Bishop says there’s nothing profound and it’s main theme seems to be that to prepare for the Asian century, we need to embrace Labor’s current policies.