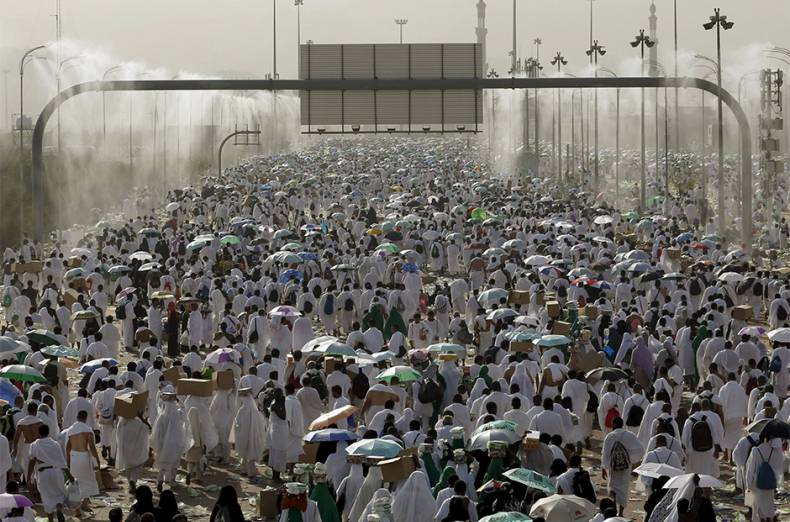 ARAFAT: Nearly two millions pilgrims from 164 nations gathered on Wednesday on the plains of Arafat, about 20 km from Makkah, for what is described as the most important and central element of the five-day annual Haj pilgrimage.
The pilgrims began moving into Arafat from Mina on Tuesday night. They took trains and buses to make the 14-km journey from Mina to Arafat. The weather was very harsh and instead of the sea of white that is the usual image during Haj, the multicolored umbrellas provided a different appearance to the landscape.

Helicopters hovered overhead and it was only when one got close to the Al-Namira Mosque that one had a clear sense of the millions that are here for Haj. The pilgrims, especially men, packed the massive mosque to listen to the Haj sermon delivered by Grand Mufti Abdul Aziz Al-Asheikh.

In the front row in the mosque was Makkah Gov. Prince Khaled Al-Faisal, wearing the two-piece mandated seamless white cloth. Outside the mosque, hundreds of thousands had lined up row after row in order to pray the combined Dhuhr and Asr prayers. It was a very dense crowd with every pilgrim lost in contemplation and reflection. They were beseeching Allah to forgive their sins of omission and of commission… see more