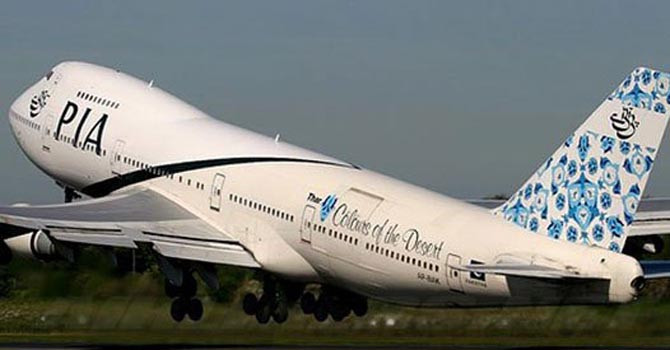 The Supreme Court was informed on Tuesday that the Pakistan International Airlines had suffered a whopping Rs119 billion loss last year alone.

“I cannot say all is right with the PIA as its balance sheet for 2011 shows losses of Rs119bn,” said Raja Bashir, the counsel for the national flag carrier. He was assisted by the airline’s legal adviser Asim Rauf.

A three-judge bench comprising Chief Justice Iftikhar Muhammad Chaudhry, Justice Gulzar Ahmed and Justice Sheikh Azmat Saeed had taken up an application moved by the Transparency International voicing apprehensions over the state of affairs and corruption in the airline.

Citing a newspaper report, the Transparency International requested the chief justice to take notice of a host of issues prevalent in PIA like purchase of aircraft at very high prices and a loss of Rs410 million suffered by the airline because of cancellation of 1,200 flights between August and November last year.

The court ordered that notices be issued to the respondents on similar petitions moved by PML-N’s Secretary General Iqbal Zafar Jhagra and Marvi Memon. They sought an investigation into the affairs of PIA to identify corruption, mismanagement, inefficiency and lack of employment of competent staff.

“It’s a pity that national institutions are being destroyed like anything; already Railways is at the verge of collapse,” the court said and expressed dismay over lack of proper assistance on behalf of PIA to the queries made by the bench.

“It is a miracle if PIA flies on time,” Justice Saeed said.

Justice Ahmed equated the airline with a bottomless pit.

Citing a State Bank report, Advocate Raja Bashir said the ratio of employees per aircraft in PIA was 350, the highest in the world. He said PIA had a fleet of 40 aircraft, but most of them were outdated while two or three were grounded.

However, the counsel said, the current PIA management under chairman Lt-Gen (retd) Asif Hayat Malik was trying to improve the situation and had assured the TI that the airline would strictly observe transparency in future deals.

The court recalled that there was a time when PIA was considered to be one of the best airlines in the world which helped to establish almost 36 famous airlines, including Emirates and Singapore Airlines. “Is there any chance of revival of PIA or it will meet the same fate as Steel Mills,” the court said and asked if any new airline was being launched.

When Asim Rauf denied that PIA had leased international routes to foreign airlines, Justice Saeed cited his personal experience and said he had bought a PIA ticket to go to Istanbul from Lahore but he travelled in the Turkish Airlines.

“There is an agreement between PIA and Turkish Airlines to carry each other’s passengers,” Raja Bashir said but the bench told him that half-truths would not suffice.

Justice Ahmed said international airports were disturbed by delay in arrival and departure of PIA flights and because of this it faced
penalties.

The court had to adjourn the hearing for Dec 4 because PIA’s representatives did not come up with satisfactory answers to the questions raised by the bench.

The court wanted to know about the ratio of passengers travelling by PIA either at reduced rates or free of cost; how many international routes have been closed; why the aircraft are overhauled abroad when PIA is equipped with hangar facilities at the Karachi Airport; whether investments are made in the hotels network owned by PIA and why private local airlines are making profits.