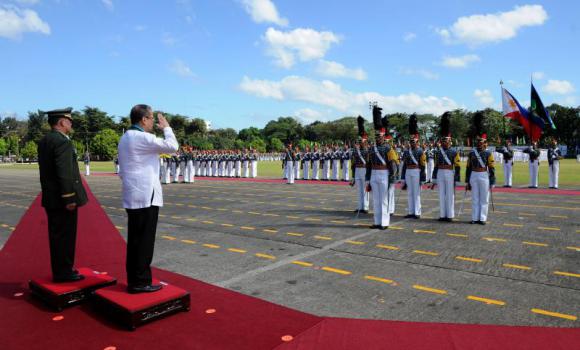 MANILA: Philippine President Benigno Aquino III has signed a law imposing up to life imprisonment for state agents convicted of being involved in enforced disappearances, the first major human rights legislation under his nearly 3-year-old government.
Aquino signed the law late Friday, two months after it was passed by Congress, presidential spokesman Edwin Lacierda said.
The human rights group Karapatan says more than 1,000 political activists and suspected supporters have disappeared since the 1972-1986 Ferdinand Marcos dictatorship, including more than 200 under Aquino’s predecessor, Gloria Macapagal Arroyo. It has documented 12 cases of enforced disappearance since 2010 under Aquino.
US-based Human Rights Watch said the new law is the first to criminalize enforced disappearances in Asia and challenged Aquino to “move quickly to enforce” it.
“Effective enforcement of this new law by the Philippine government will deter enforced disappearances and address the deep-seated problem of impunity for human rights abusers,” Brad Adams, the group’s director for Asia, said in a statement.
The law defines an enforced disappearance as the abduction or “any other form of deprivation of liberty” of a person by state officials or their agents who subsequently conceal the person’s fate or whereabouts.
Human rights groups have reported that such people have been kept in a network of “safe houses” where they are tortured and sometimes killed, their bodies buried in unknown graves or dumped in remote areas. They say this was extensively practiced during the Marcos regime.
The law also prohibits a practice by security forces of listing people they perceive to be “enemies of the state” to make them “legitimate targets as combatants,” including those not formally charged with a crime. Those listed are open to assassinations, abductions, harassment and intimidation.
The law cannot be suspended even during wartime and does not permit amnesty for those convicted. Superior officers of those found responsible are to be equally penalized.
The number of attacks against political opponents of the government has risen alongside the growth of the still unresolved 43-year-old communist insurgency and the decades-long Muslim rebellion in the southern Philippines, which appears close to a political resolution following a preliminary peace accord signed by government and rebel negotiators this year.
Aquino, son of revered pro-democracy icons, has pledged to take steps to prosecute violators of human rights during the previous administration and prevent new ones. Rights groups, however, say violations have continued under Aquino.
The groups have urged Aquino to prosecute violators of human rights during the Arroyo administration, particularly in searching for a former army general accused of kidnapping two female students who have not been heard from for years.
The Aquino administration is also being pushed to prioritize the passage of a bill pending in Congress to compensate thousands of victims of human rights abuses, including disappearances, during the Marcos dictatorship.