by abi
in Fashion, Pakistan, World
0

Nomi Ansari’s Flower Power
Nomi Ansari’s collection started the show off with a bang. ‘Gul’ contained all the hues and shades of the rainbow, and then some.

Nomi has always had a way with colours, managing to combine different ones and create a cohesive outfit, and with ‘Gul’ he has created a collection that would fulfill the wildest dreams of any bride on her wedding day. 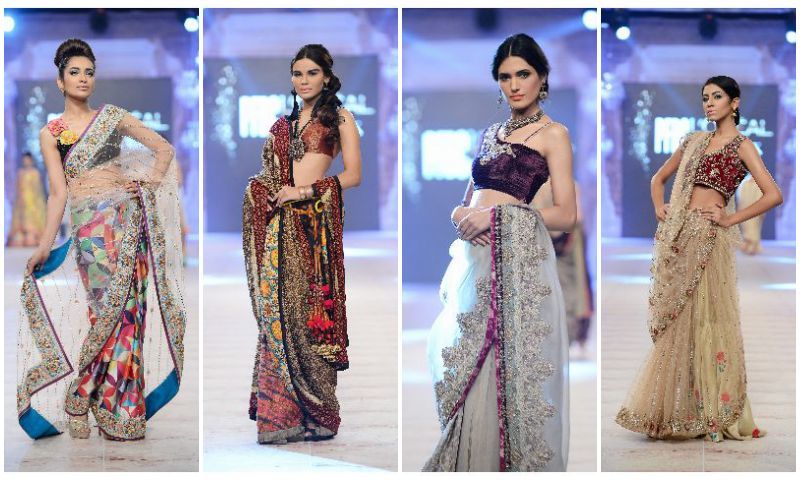 A particular standout was a raw silk lehnga, covered in digitally printed roses. According to the designer, each kali in the lehnga was cut from raw silk and printed individually, then dusted with sequins before being crafted in its voluminous glory. 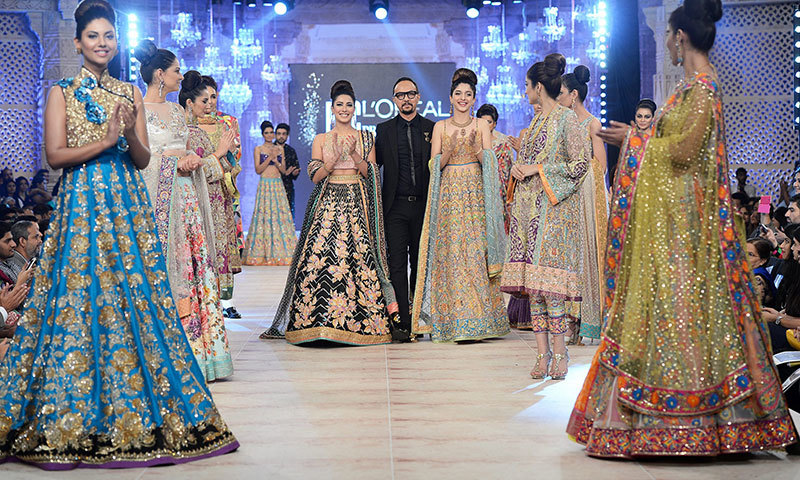 Some of the prints on the ramp echoed the designs for his ‘Canvas’ collaboration with Rose Petal, in the diamonte studded sari and the silk dhoti shalwar. Speaking of, between the shalwars at Zara Shahjahan on Day 2, and the gorgeously crafted dhoti shalwars at Nomi Ansari, it’s safe to say that palazzos are out.

The show also brought some serious star power to the ramp, with Mawra Hocane and Mehwish Hayat sashaying out at the end as showstoppers, the latter to raucous applause. 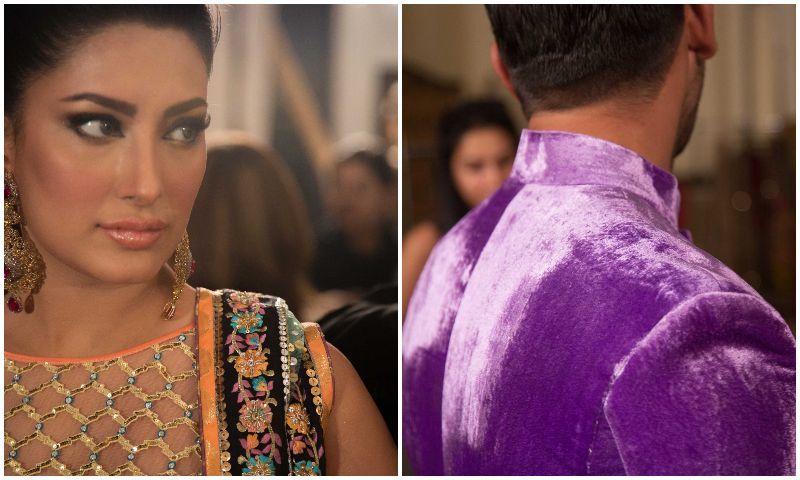 Nida Azwer has always been a proponent of classic techniques and artistry. This year, she is bringing kaamdaani back into bridal fashion.

Kaamdani will be a big trend this shaadi season now that Nida has used the technique on everything from angarkhas and saris to duputtas. She has used a wide array of rich fabrics, from Chantilly lace to chiffons, silk and velvet and has made them work together beautifully. In one outfit, she combined a chiffon kaamdani angarkha with a crushed velvet lehnga. 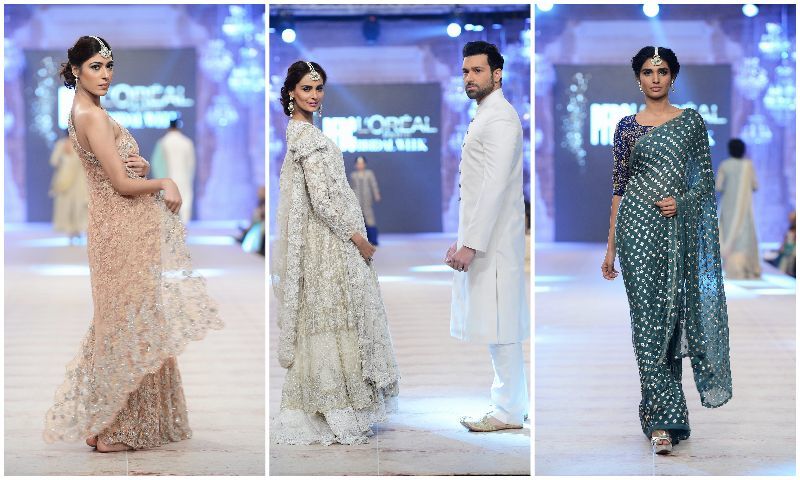 For the ‘Ghalib’ collection, she has also done away with embellished or sequined borders in favour of delicate cutwork ones on hemlines and sari pallus. Her signature shatoosh shawls were back again, and as delicate and beautiful as before. With this collection, she let the richness of the fabric itself do the talking, but I did miss seeing her signature prints on the runway though.

A Nida Azwar print is unmistakable, and her prowess with textile design has always been one of her strong suits. 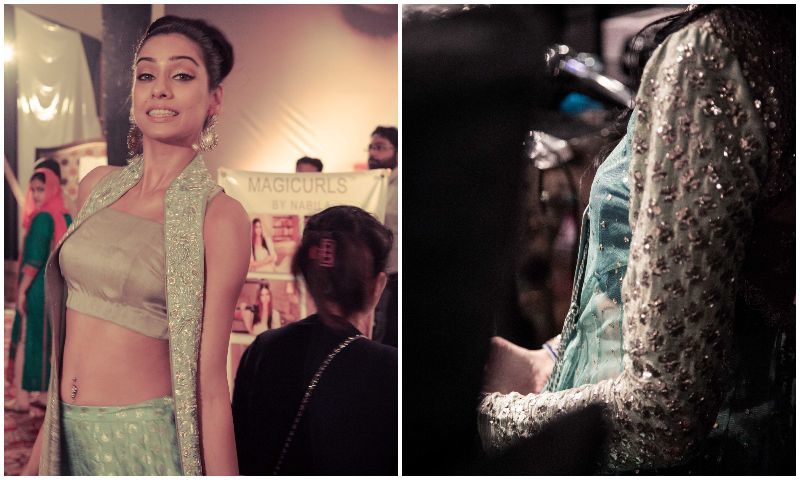 Misha Lakhani closed off the first showcase on Day 3. After an inconsistent two days, this was the first segment that did not have a single misstep throughout its entire lineup.

Misha’s ‘Nowruz’ was encapsulated youthful sophistication. It was fresh, feminine and just flirty enough to stay on the right side of elegant. The sheer angarkhas were a particular favourite, allowing the delicate blouses and lehngas underneath to be seen, while still allowing for the floral embroideries and gold embellishments to sit demurely against bare skin.

Velvet is not a fabric that is generally perceived as youthful, by Misha managed to make it so, especially with her well-structured kaftans and embroidered waistcoats.

While most of her collection was in neutral tones of dull gold and beige, with some fresh peach and earthy pistachio thrown into the mix, it was not boring due to the gorgeous fuschia pink embroidery that she used as a connecting thread through out the collection.

Nowruz is a fantastic example of how a collection can be cohesive without being monotonous. 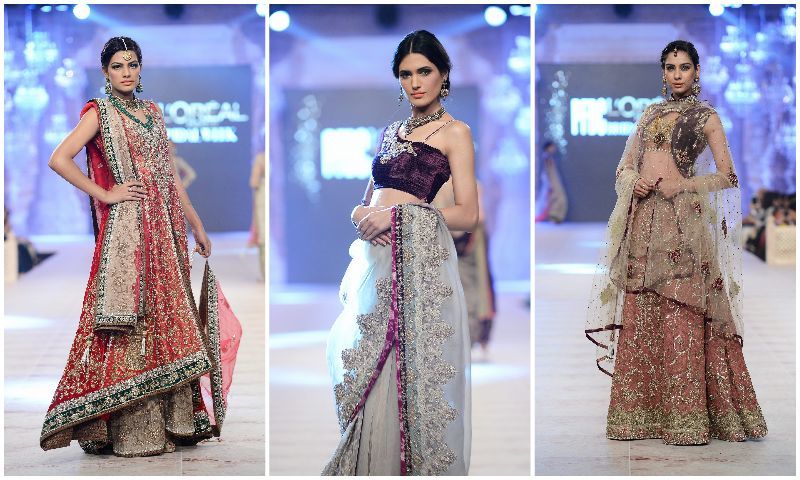 Nickie Nina’s ‘Rumi to Raj’ was one of the strongest collections that they’ve shown on the ramp yet. The collection heavily favoured jamawar and organza, which should also be big this wedding season. It adds a much more ethereal touch to an outfit than a chiffon duputta, and takes to embellishment extremely well.

The silhouettes in ‘Rumi to Raj’ were largely similar to the ones that were seen on the runway previously; short kurtas and straight kameezes with embellished cropped trousers, angarkhas with lehngas and velvet shawls.

Instead of net cancans under the lehngas, the skirts were apparently lined with stiff buckram to ensure they held their shape, which is an odd choice and certainly a very uncomfortable one.

Nickie Nina’s collection is like the conventional Pakistani bride’s taste – pretty enough, but a tad unimaginative – and will appeal to the same. 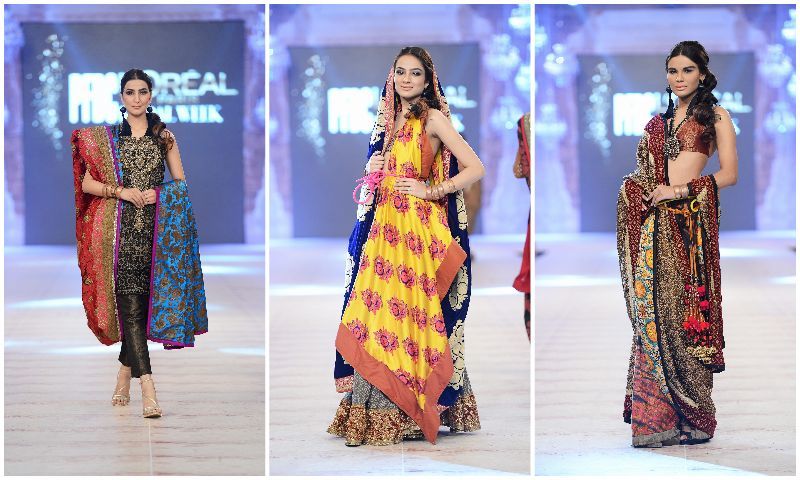 Sana Safinaz bridals are about as close to Sabyasachi as the discerning Pakistani bride can get, and with this collection it gets perhaps a bit too close to the Indian couturier circa 2012.

That said, the collection was beautiful, and at times stunning in its simplicity. There were quite a few covetable separates on the ramp, such as the deep plum and black silk skirt on Sadaf Kanwal, and the intricate embroidered coat on Mehreen Syed. 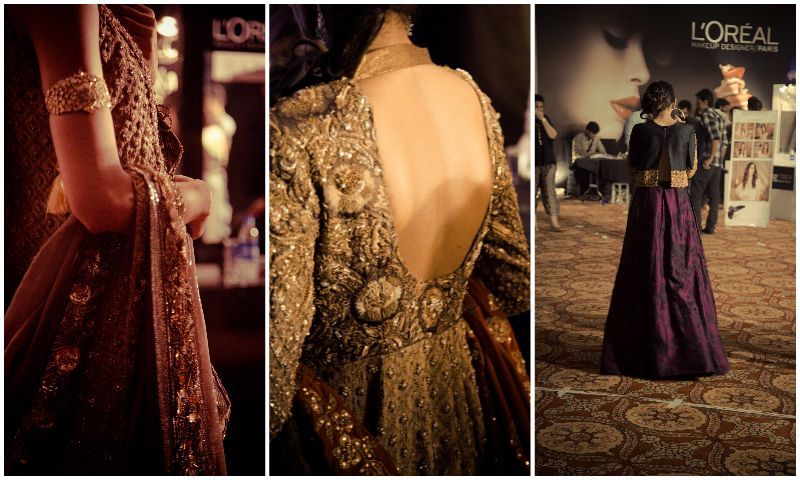 The saris and the shawls were the highlight of the collection, while some of the bridal wear, especially the gold showstopper ensemble, was a tad underwhelming. I have seen some truly spectacular Sana Safinaz bridals, and the gold bridal does not fall into the same category at all. For that outfit, and some of the others, I had a problem with the duputtas – they looked like they had been made from low quality already embellished market bought fabric, especially the ones with the sequin clusters on them.