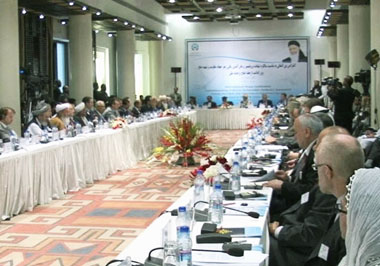 The Taliban will not regain power in Afghanistan and the fight against them will continue until they accept the country’s Constitution, First Vice President Mohammad Qasim Fahim warned at a conference for peace Saturday.

Fahim told those at the two-day Peace and Unity Week conference in Kabul that the Taliban will never again regain power and Afghans will not lose the past decade’s achievements.

“If they do not accept the Afghanistan Constitution, the fight will continue,” Fahim said.

He went on to address concerns that the withdrawal of foreign forces from Afghanistan will see the Taliban gain an upper hand, reassuring that it would not happen.

“The Taliban will never return to power again and they will never have the place over the people as they had before,” he added.

Also at the conference, head of Afghanistan’s High Peace Council Salahuddin Rabbani called on religious scholars of all Islamic countries to fight against extremism.

“Peace cannot be achieved by proclamation or by statements,” Unama Deputy Special Representative Nicholas Haysom said at the gathering. “Afghans recognise that the destiny is a common one and can only be jointly managed by respecting the differences due to accommodating the aspirations of all, not only by the silencing the guns, but by building a just peace that benefits all.”

The conference was held to bring together several envoys from around the world to discuss solutions to achieving peace in Afghanistan.
www.tolonews.com