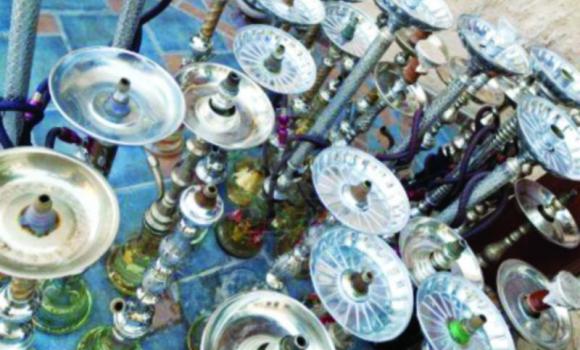 JEDDAH: With a vast collection of flavors to choose from, smoking shisha has become a trend among youngsters. Cafes, restaurants and coffee shops are swamped with people who have shisha pipes by their tables and are happily smoking it.
For Ahmed Saleh Omer, 27, smoking shisha is the perfect way to unwind in the evening. “After a long day, I go to a shisha lounge. It calms and relaxes me. Just like others need a cigarette to keep going, I enjoy doing shisha. It has now become a daily routine.”
Noura Nawaf, a graduate student, said: “I have no reason for smoking shisha. It’s something I just like to do.”
According to research carried out by the World Health Organization (WHO), the volume of smoke inhaled in an hour-long shisha session is estimated to be the equivalent of smoking between 100 and 200 cigarettes and causes several health problems.
Some youngsters have also been found with the puffs being laced with drugs. Nasrullah, professor at King Abdulaziz University, commented on this unhealthy trend: “Tobacco consumed in any form is harmful, as it contains chemicals that are carcinogenic and toxic.”
Sara Mohammed Khaleel, a teacher, said: “There is a misunderstanding that shisha as an alternative to cigarette smoking is safer than a cigarette, since nicotine gets filtered through water, but it has been claimed by medical experts that nicotine is not water soluble. Youngsters should be aware of the hard-hitting facts of shisha.”
However, Farah, a medical student, is not convinced that shisha is as harmful as cigarettes. Quoting tobacco researcher Kamal Chaouchi, she said the harmful TAR (total aerosol residue) in both makes the difference. While the tobacco in the cigarette gets burned, producing the TAR and harming the smoker, it is not so in the shisha. The tobacco in the shisha does not get burned but gets cooked, and no combustion takes place anywhere and so it produces no TAR, she said.
The shisha is a glass-bottomed water pipe in which fruit-flavored tobacco is covered with foil and roasted with charcoal. It comes in a variety of flavors. Many people have of late been flocking to shisha lounges mushrooming in and around Jeddah.
The so-called shisha lounges are hot places, not only among Saudi youth but also among their expatriate counterparts. There has been an endless argument whether smoking shisha is as harmful as cigarette smoking. Several youngsters hold on to the myth that shisha is not as dangerous to health as smoking a cigarette. But recent studies have found that shisha smokers actually inhale more nicotine than cigarette smokers, because of the massive volume of smoke inhaled.
“I love doing shisha,” said student Gadeer Abdullah. “I like the feeling of dizziness when I inhale the smoke, and the fruit-flavored tobacco tastes smooth and smells sweet.”
Sixteen-year-old Hashim just wanted to experience shisha and smoked once, then again and again, and now he enjoys it a lot. It has become a style statement for some members of the youth brigade to visit cafes that offer shisha. “It’s cool and trendy,” he said with an aura of pride.
Shisha smoking youth love to enjoy their smoke in cafes or lounges, or even call friends at home for a shisha party. They consider this the “new way of socializing”, in which people sit around a shisha and take turns smoking it.
Parents say the growing consumption of shisha among their children is of great concern to them. Mohammed Hashim, an elderly office executive, said: “I have discouraged my son from smoking on several occasions, advising him that he is only 17 and it’s bad for his health. Now he does not indulge in it in my presence and discuss the smoking subject in front of me, as he is scared. He enjoys doing it on my back.” Hashim pleads that shisha joints impose age restrictions and stop entertaining young kids.