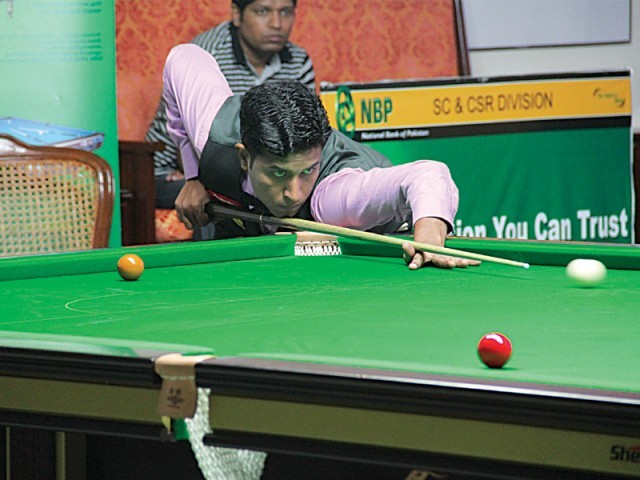 Playing up to his true potential, country’s top cueist Mohammad Asif thrashed second seed Asjad Iqbal 7-1 in the best of 13 frames final to land Langnese Ranking Snooker Cup, his second title of the year, at the National Bank of Pakistan Sports complex on Saturday.

“I was confident and have worked hard to win the honours to qualify for the IBSF world snooker championship being held at Sofia, Bulgaria, from Nov 24 to Dec 2,” Asif, a native of Faisalabad, who retained the title, told Dawn after the final.

The losing finalist, Asjad, also qualified for the world meet.

Referring to Asjad, he said: “Asjad was young and hoped international exposure will help him gain confidence,”

He applauded the games controlling body for making concerted efforts for the promotion of game despite financial constraints.

Asif, who topped group A, gave a 5-2 drubbing to Mohammad Javed in the quarter-final and overcame 6-4 to Sohail Shehzad in the semi-final to become the only player who remained unbeaten.

The 20-year-old Asjad, who thumped Shehram Changezi 6-0 in the semi-final, was completely off-colour and could only manage to win a single frame. “It was a bad day for me as I failed to produce my original game,” said Asjad, who played his third successive final of the circuit winning two and losing one.

Asjad was awarded Rs40,000 and the runner-up trophy. Shahid Aftab, a former national champion, who conjured up highest break of 133, got richer by Rs5,000 for the feat.

Speaking on the occasion, the minister announced half-a-million rupees towards the construction of snooker academy and promised to get more funds for the project by apprising the Sindh chief minister.

Speaking on the occasion, Anjum Nisar announced to sponsor jobless Asif for a year on monthly emoluments of Rs10,000. He also announced a sum of Rs1,00,000 towards the construction of academy.

President of the Pakistan Billiards and Snooker Association (PBSA), Alamgir Shaikh, also spoke on the occasion and disclosed that he had received the possession of the piece of land for the academy from the Karachi Metropolitan Corporation (KMC).