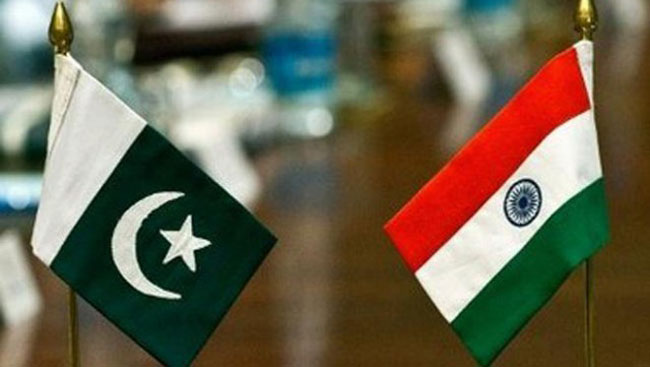 Pakistan-bashing is an Indian disease. Indian television and print media do not miss a single day without derisively discussing Pakistan. It is an obsession that overpowers Indian intelligentsia, politicians and professionals.The daily “Pakistan is evil” repetition has made Indians delusional and arrogant.

Bollywood has also contributed in giving the Indian audience a high with aggrandized Indian heroes vanquishing Pakistanis in huge numbers. This contrived patriotism unfortunately makes Indians lose all remaining logic and reasoning. Indians dream of war against Pakistan where they would destroy Pakistan like a castle of melting wax.

The masses accept everything which is thrown at them by the Indian establishment and its paid political analysts.

The Indian nation again experiences a high when visiting dignitaries run down Pakistan while in India.
Barack Obama became instantly unpopular as he did not condemn or criticize Pakistan while on a visit, Nicholas Sarkozy was perceived as a great guy when he condemned Pakistan in a press conference. This obsession can be seen in its worst form on social media, it is amusing that Indians have a lot of free time and energy to make fake ids to abuse Pakistan while Pakistanis have no inclination to do likewise. Even Indian celebrities or intellectuals display their phobia on Twitter from time to time.

A controversial person like Modi can win the elections merely by tapping on the Pakistan obsession and giving broad hints a final war remains to “take back what belongs to them”. It is incredible that political parties still win by using the typical anti Pakistan jargon while India is not doing so well itself. Corruption is even more rampant in India than in Pakistan. Billions of rupees are being stolen by India’s top elite in major scams.

Indians have a bigger economy as well as bigger corruption and bigger scams. There are huge populations of homeless people seen in every large city, and there is hunger nobody talks about. The spiraling statistics of suicides by Indian farmers, female infanticide or rape are not discussed on television or newspaper media as they should. Then, most Indians are gleeful that Pakistan is a hotbed of extremism, they say we have Jamaat e Islami, Jamaat u Dawaa, LeT, Taliban and Al Qaida running around openly.

They dont want to discuss their injustices against minorities and Dalits or burning alive Christian missionaries, raping of Christian nuns by Hindu zealots. Maoism, Naxalites and North-Eastern insurgencies, Kashmir and many more major insurgencies, more than 150 in number are not discussed.

India is knitted together in collective agony by a huge, ruthless army, paramilitary and abject poverty of the masses. Last year, India got the title of the world, s poorest nation in a World Bank report, groaning with over-population and no solution.

Every Indians pet dream is Pakistan as a failed state, with an eternal begging bowl in its hand until it finally falls into India, s lap. The Indians thought this would happen in 1971 when they tore East Pakistan away with cobspiracies, in 1978 when Bhutto was hanged, in 1988 when General Zia died etc etc. Still Pakistan has survived, it has become a nuclear power, an indispensable power for the stability of South Asia. It was India that started provoking Pakistan by carrying out nuclear tests near its borders, all this compelled Pakistan to become an advanced nuclear power.

It is India that unfairly acquired most of its land, it was no authority to illegally occupy Muslim states that would have acceded to Pakistan if left on their own. At the time of partition, there was no India but that which the British gave an identity, before that Indians were Muslim subjects for 1000 years and might have remained so if not for the British.

So India went ahead and occupied states with Muslim majority which would have acceded to Pakistan if left in peace, like Kashmir, Hyderabad/Deccan, Junagadh and Bantva-Manavader and its 26 Muslim villages. India also occupied Sikkim, Manicoy islands and Siachin glacier. The Portuguese were allowed in Goa as they were Europeans even though they did not have any connection with the sub-continent. The noble Indians condone RAW funding, training and deploying the Mukti Bahini many years before 1971 yet get infuriated if Pakistan supports an international disputed territory like Kashmir.

And all the morality in the world is India’s monopoly. As a demonstration of its morality here are a few events, India rampaged through the sacred Sikh Golden Temple and Harminder Sahib in Amritsar with Russian-made tanks, murdered hundreds of Sikhs. In another occurrence, India’s ‘secular’ government watched while Saffron Hindu terrorists desecrated and destroyed the Babri Masjid.

Then the extremely popular Modi presented India with a state-sponsored pogrom in Gujarat murdering over 3000 Muslims including Ehsan Jafri, an ex-Member of Indian Parliament. Hindu mobs cut opened the wombs of pregnant Muslim women, took out the fetuses and hoisted them on Hindu trishuls.

In an adventurous mood, India sent its military to Sri Lanka and massacred both the Sinhalese and the Tamils in Velvettiturai and Trincomalee and named its contingent as IPKF/ Indian Peace Keeping Force (pun intended) The worlds largest democracy, India has always supported the guerrilla Baluchistan Liberation Army and many other Taliban related terror outfits to destabilize Pakistan and Iran.

India’s current concerns for Afghanistan are so genuine that it was nothing if it had supported the illegal, immoral and brutal Soviet invasion of Afghanisan in the 80s – the entire free world protested while India, the ‘non-aligned democracy’ supported the wholesale murder of 2 million Afghans. India supported the Northern Alliance against the Pashtun majority but condemns Pakistan for interference.

India continues to stall resolutions with Bangladesh over river boundaries and hundreds of enclaves, the civilized country continues to steal water from its neighbors Pakistan and Nepal by building dams that contravene water treaties.

Indian border forces have killed hundreds of Bangladeshi border guards, and likewise Pakistani soldiers on the Line of Control, an international boundary. India also continues to fence the disputed borders with Bangladesh regardless of the Bangladeshi protests, so much for the simpering Hasina Wajid. India has also maintained a contested boundary with Nepal including 400 square kilometers over the Kalapani River and it continues to stall negotiations on the Sir Creek dispute with Pakistan

Not to feel left out , India makes bellicose and hollow statements about initiating Cold Start wars with both China and Pakistan. Meanwhile, India respects the McMahon line with China but disagrees with the Durand Line between Pakistan and Afghanistan. India maintains an army of 700,000 soldiers, 5 for each civilian in Kashmir, it has rejected UN proposals to keep 16,000 troops until a plebiscite is held.

Last but not the least, India suppresses 150 million of its own citizens with the world, s most vicious form of discrimination, the caste system. One wonders how India, s minorities, lower castes and suppressed ethnic groups really feel. India would be more in the know only if spent less time on bashing Pakistan, and spent its resources on fixing what really irks Shining India.

By: Sabena Siddiqi
Note: Al-Rasub is not responsible for writer personal opinion.