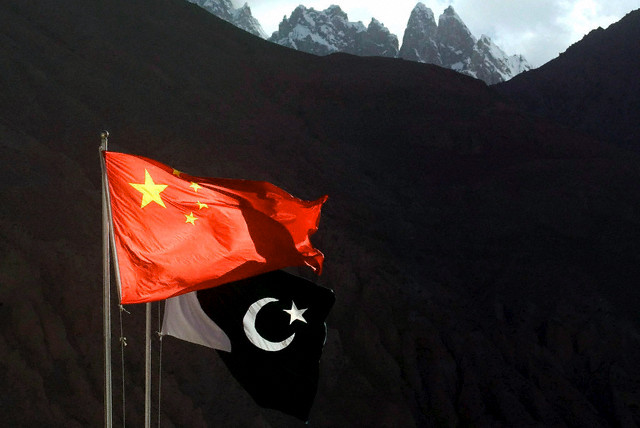 Pakistan plans a joint military parade of its armed forces on 23rd March, its National Day next month. Chinese President Xi Jinping is to be the chief guest, right now both the countries are engrossed in working out modalities for the impending visit through diplomatic channels.

This year,s parade promises to be an unprecedented show of strength and a re-affirmation of China and Pakistan as strategic allies. China and Pakistan are friends and allies since decades while India is a common enemy, Pak-China friendship has always been said to be higher than the mountains and deeper than the sea , 81% Pakistanis view China favorably, the highest rate out of any country without a sizable ethnic Chinese population. This parade is a challenge for adversaries and display of a formidable nuclear power bloc.

Pakistan is an important strategic ally that can further Chinese ambitions, China has an Asia-Pacific dream with two new Silk Roads, a free-trade zone and a Chinese string of pearls signifying naval bases on strategic sea routes. Gwadar in Pakistan is the most important and best strategically located pearl. China is willing to spend tens of billions of dollars in infrastructure investment to further these ambitions.

Recently, Obama attended India,s Republic Day parade alongside Modi, on the same day the Pakistan army chief was in Beijing. China is the ultimate U.S rival while Pakistan is India, s rival. China and Pakistan have always been close regional allies, and now the Obama visit to India last month brought them further close.

Pakistan felt that the Obama visit to India was a slight being America,s front-line ally in the ongoing war against terror. Recently a Chinese Foreign Ministry spokesperson told media in Beijing in response to questions regarding the impending visit:

“We are willing to keep up the momentum with the Pakistan side.”

Highlighting the importance of the high-level visit he said:

“China and Pakistan are all-weather strategic partners of cooperation, and the two sides maintain frequent high-level exchanges which serve as inexhaustible driving force for China-Pakistan relations.”

Pakistan Day parade will be a powerful riposte to both India and the U.S, it marks an important strategic rebalance toward Asia, often referred to as the Asia-Pacific pivot. It signifies a shift in the tectonic plates of this region, nothing less than an earthquake modifying the terrain.

Essentially, India seems set to receive a setback as it is in Asia but has friends outside it at a time that the power balance is slowly edging towards Asia. India has managed to create a distance with almost nearly all its neighbors, as the region consolidates with China, India will feel isolated.

Recently the Chinese President had visited India, even while Xi sat with Modi talking positively, Chinese troops amassed on the disputed Himalayan borders with India. So there is an ambivalence in China,s India strategy. It is assertive and aggressive alternatively, it is for sure that if China stakes its claims on any territory, it fully intends to acquire it.

It can use diplomacy at times, and at times decisive aggression. This transitory nature of China was highlighted recently by Yanmie Xie, a senior China analyst at the International Crisis Group.

Then there is the Shanghai Co-operation Organisation, it is primarily dominated by China and then Russia, and also includes Central Asian republics Kazakhstan, Kyrgyzstan, Tajikistan, and Uzbekistan. This year in an expansion, the SCO will invite Pakistan and India to join as full members in its summit in Ufa, Russia.

“An expanded SCO will be in a better position to achieve Xi’s vision of becoming the regional security heavyweight,” wrote Shannon Tiezzi in an analysis at The Diplomat. “Despite a tendency to see the SCO as a competitor to NATO, Chinese leaders stress that the SCO is something entirely new. In Dushanbe, Xi announced that ‘SCO members have created a new model of international relations — partnership instead of alliance.’SCO promises to advance Chinese power play and strategy.

Chinese Foreign Minister Wang Yi is arriving soon to finalise the details, various agreements of great importance will also be signed. The China-Pakistan economic corridor would be formally inaugurated from an undisclosed location due to security concerns.

The China Pakistan Economic Corridor connecting western China to South Pakistan will bring economic development and progress once Gwadar port is fully functional.Pak-China Economic Corridor will link Gwadar through road and rail to Kashgar making it the shortest route for China to use for trade.

The joint military parade of the Pakistan armed forces was last held in 2008 in Musharraf, s time, after that it was discontinued citing security issues. Pakistan army, navy and air force contingents will be arriving in Islamabad soon for the parade rehearsals. It is expected that some of the nuclear arsenal may be shown, a pair of Shaheen-II ballistic missiles had been displayed during the Pakistan Day parade on 23 March 2000.

The military parade after seven years is also a symbol of strength as an affirmation of the nation,s resolve, particularly in the aftermath of the brutal terrorist attack on the Army Public School in Peshawar on December 16th. This has left the armed forces and people of Pakistan determined to crush terrorism, it is a now or never juncture in Pakistan, s history.
The tragedy shook the country’s conscience, with the government and military devising an National Action Plan.

The Prime Minister announced the lifting of the six-year moratorium on the death penalty in terrorism cases. It was also decided to create special military courts, General Raheel Sharif vowed to intensify the war against militants with heightened military offensives.

The army has new resolve and determination to exterminate all the foreign militants and locals working in tandem against Pakistan.The Pakistan Day parade will also be a chance to show the world that Pakistan emerges even stronger from crises.