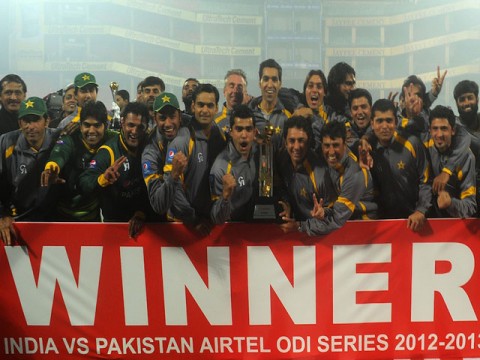 IT all ended in a nail-biter at the Feroz Shah Kotla Stadium as India snatched a 10-run win, more due to carelessness by the Pakistan batsmen — in particular by Umar Akmal — in pursuit of a 168-run target on a difficult but playable surface.

However, to the immense delight of tens of millions of fans back home, a highly disciplined Pakistan side completed a successful tour, ending the ODI series as 2-1 winners.

The manner in which the green-shirts combined to clinch the ODI series after squaring the Twenty20 rubber certainly merits praise. And though the series did not feature Tests, it in no way lessened the excitement Indo-Pak cricket battles are known to produce.

In particular, the added determination shown by Misbah-ul-Haq and Mohammad Hafeez’s boys was indeed visible throughout the tour.

After winning the T20 series opener in Bangalore in a thrilling fashion, Pakistan never looked back.

And from a position of making resolute comeback in the second T20 in Ahmedabad where the tourists went down fighting, Pakistan gradually attained clear dominance over Mahendra Singh Dhoni’s men in the 50-overs-a-side games, before dipping in Delhi.

The tussle between the Indian batsmen and the Pakistan pacemen has been the hallmark of the clashes between the arch-rivals over the years. But that equation was expected to change given the fact that the current Pakistan side does not have the speed-and-swing merchants like Imran Khan, Wasim Akram and Waqar Younis in their ranks with Umar Gul their only experienced spearhead.

However, Junaid Khan defied all the odds and took charge. Bowling with a big heart and near-perfect accuracy, the rookie left-armer with a prodigious combination of speed and swing simply outgunned the likes of Gautam Gambhir, Virender Sehwag, Yuvraj Singh, Virat Kohli and Rohit Sharma.

And fortunately for Pakistan, Mohammad Irfan clicked and was ready to complement Junaid. Though the 30-year-old greenhorn could only bag four wickets in all the five limited-overs games on the tour, the gigantic bowler from the other end kept the Indians guessing with his pace and extra bounce.

But it wasn’t just the bowlers who shone.

Nasir undoubtedly graduated in this demanding series. The left-handed opener coped with the situations with patience and resolve, playing with extremely solid defence and timely belligerence though shot-making on the off-side and running between the wickets remain his gray areas. One hopes the burly batter overcomes these quickly to prolong his stay in world cricket.

Hafeez was phenomenal, both with bat and ball. The Twenty20 skipper, who was instrumental in helping Pakistan draw the T20 series, also proved himself in the ODIs that he is a class act who can perform consistently.

Boasting all the attributes of a complete player, Hafeez can be seriously considered for ODI and Test leadership after Misbah leaves the scene.

The mettlesome showing by our batting under extreme pressure in India is somehow a good omen before Pakistan embark upon the tour to South Africa where our batsmen will certainly face the mightiest of challenge. On the other hand our awful capitulation in Delhi ODI should remain a major concern for the team’s think-tank.

Dav Whatmore’s contribution in Pakistan’s historic success in India has not been anything short of highly significant. The Aussie’s exceptional cricketing astuteness and proven coaching credentials coupled with the intelligent calmness and subtlety of Hafeez and Misbah paid rich dividends in India.

One hopes the coach will continue to get appropriate authority from the Pakistan Cricket Board (PCB) so that he could carry on his responsibility for facilitating Pakistan give impressive results against top opponents. One strongly believes the sharp coach, if given proper time and the right ambiance by the authorities concerned, can also help the PCB a great deal find and channelise Pakistan’s rich cricketing talent which largely remains untapped or underutilised primarily due to poor management and internal wrangling.

Keeping a vigilant eye on one’s own errors during good times is important for sustaining success. The touring team management, after the ODI series victory in Kolkata, should have tested some of the bench strength.

Keeping Wahab Riaz, Haris Sohail and Anwar Ali on the bench for the entire tour cannot be regarded as a smart move if taken in the larger context. Umar Akmal’s avoidable blooper in the second T20 that cost Pakistan the game, simply warranted Haris’ inclusion in the final ODI where Umar only repeated the blunder just when the team required him to be patient.On the other hand, India need some serious soul-searching. The world champions’ humiliating loss at the hands of Pakistan has come after the 1-2 thrashing in the four-Test home series against England.

The captaincy future of Dhoni, who single-handedly faced the well-disciplined Pakistan bowling with grit and solidity in the ODI series, will be talked of while the fate of several ‘star’ Indian players will come under the scanner sooner or later. – dawn.com