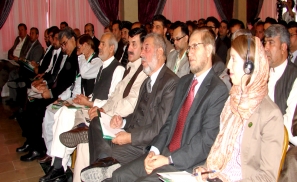 KABUL: Pak-Afghanistan trade joint meeting held on Monday here would address challenges faced by business community in both countries.
The 3rd joint meeting of Pak-Afghan Joint Chamber of Commerce and Industry (PAJCC), which was attended by trade delegation and businessmen of the both countries to discuss common business challenges and find ways for resolving the issues.
Co-President of PAJCC, Khanjan Alkozai, said that holding of joint trade meetings were a good initiative which would leave positive impacts and would enhance bilateral trade relations.
While highlighting challenges faced by Afghan business community in Pakistan, he said that Islamabad should take steps to address problems of Afghan traders on priority bases in order to enhance bilateral trade.
He requested Pakistani investors to invest in Afghanistan in different sectors as the country had plenty of economic opportunities. “Pakistan should issue multiple entry visa to Afghan businessmen by supporting PAJCC that could make trade deals easier between both countries,” he added.
Alkozai said that Karachi and Wagah were nearest routes for Afghanistan to access outer world while Afghanistan was the best option for Pakistan to reach Central Asian markets. Hence, both countries should help traders in both sides to further improve trade.
Trade delegations would also review traders’ feedback about the operation of PAJCC.
Deputy of Ministry of Commerce and Industries (MoCI), Muzamil Shenwari, said that still several problems were faced by Afghan traders including un-implementation of Afghan-Pak Transit Trade Agreement (APTTA) in letters and spirit. Islamabad should take steps to resolve problems faced by Afghan traders for enhancing commercial deal between both nations.
He said that MoCI was ready to help PAJCC as well as provide opportunities to Pak traders.
President of PAJCC, Mohammad Zubair Motiwala, said that measures would be taken to help Afghan traders and create economic opportunities to them in Pakistan.
He expressed his pleasure over performance of PAJCC, and said that the joint chamber would leave no stone unturned to address grievances of traders on time.
www.afghansitantimes.af